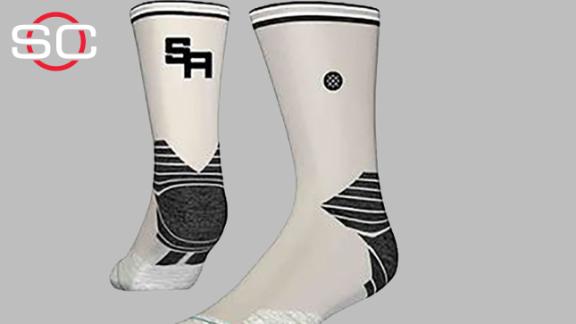 The competitive basketball sock business has led to a new sponsorship deal for the NBA, as the league will announce Monday that Stance will be its official sock and that all players will wear the company's product.

Terms were not disclosed, but Stance, which solely makes socks, will be giving the NBA a guaranteed royalty, as is standard with licensing deals. As part of the multiyear deal, which will begin next season, Stance will make socks for all the league's players in team colors. Those socks, as well as other limited-edition socks made by Stance, will be sold at retail.

"We're just this little sock company that's the first brand to have its logo on every player on the NBA court," said Clarke Miyasaki, Stance executive vice president of business development. "I hope this gives us a big advantage at retail. All we do is socks, and we're committed to making the best for the best players in the world."

For more than 15 years, the official sock of the NBA was made by a company called FBF, which produced white socks and black socks with the NBA logo on them, and more recently has had success selling socks with current players on them.

With the market at a critical time -- industry types question how many pairs of $20 basketball socks a 15-year-old can have in his or her drawer -- Miyazaki said it was time to make a move and knock out the incumbent.

At a meeting in New Orleans in February 2014 during NBA All-Star Weekend, Miyasaki pulled off the ultimate baller move.

He slid an envelope to Lisa Piken Koper, the NBA's vice president of licensing. She opened it and found a million-dollar check inside.

"She asked if it was a real check and I said it was," Miyasaki said. "I wanted them to take us seriously, and there is always something about a million-dollar check."

Piken Koper said the league started to see the sock craze grow four years ago and has watched it each year as it has continued to grow by triple digits annually.

"We will look to Stance to work with us to help further innovate the category," Piken Koper said.

The category has soared since Nike unveiled its Elite socks in 2007. Originally meant for performance, companies like Stance injected the fashion. By 2013, Nike announced its sock business had reached $100 million, and it keeps growing. On Tuesday, Nike is putting socks in its customizable NikeID program for the first time.

In its five years of business, Stance has grown at least 100 percent in business every year, generating tens of millions of dollars in annual revenue, Miyasaki said. The basketball business -- which includes socks that feature images of legends, its basketball performance line and its fashion line with Miami Heat guard Dwyane Wade -- makes up roughly 10 percent of sales. The company's socks are priced from $14 to $25 a pair.

Stance, whose investors include Jay Z and Will Smith, was founded by former Skullcandy executives who were looking for the next big thing.

"We looked into sunscreen, jewelry and school supplies," Miyazaki said. "Then we came upon socks. It was a category that had not evolved, sold in the same three to six packs for years. And it was not merchandised well either -- thrown in the same bin. We made our way to socks and realized it was the latest fashion accessory competing with hats. It's now a necessary part of your kit."

Piken Koper admits she still has the million-dollar check in her drawer. If she wants to cash it, she has to wait until the partnership starts. The check is dated August 1, 2015.