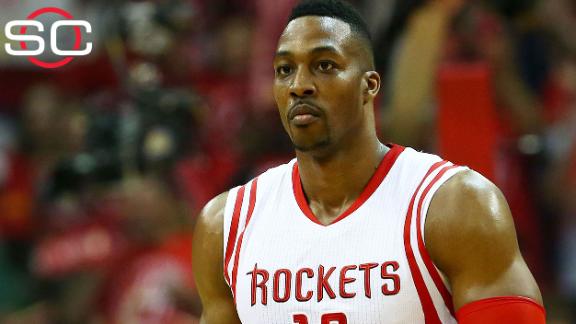 ESPN
By Brian Windhorst
After review, the NBA elected not to suspend Houston Rockets center Dwight Howard for Game 5 of the Western Conference finals, the league announced Tuesday.

League officials deemed that Howard's blow to Golden State Warriors center Andrew Bogut did not rise to the standard that would trigger an upgrade to a flagrant foul 2. Howard, who was called for a flagrant 1, would have been given an automatic suspension had the foul been upgraded due to previous flagrant fouls in the playoffs.

"I deemed it unnecessary but not unnecessary and excessive," NBA president of basketball operations Rod Thorn said. "It wasn't over the limit."

Thorn said that Howard was at first trying to free himself from getting tangled with Bogut. He said that Howard did not make contact with Bogut with an elbow but with the back of his hand. He also said Howard's status on the cusp of an automatic suspension did not play a factor in the decision.

"I did not take into consideration [the automatic suspension]," Thorn said. "I take each situation on its own."

Howard also is on the verge of a suspension because of technical fouls. One more technical or one more flagrant foul would trigger a suspension.