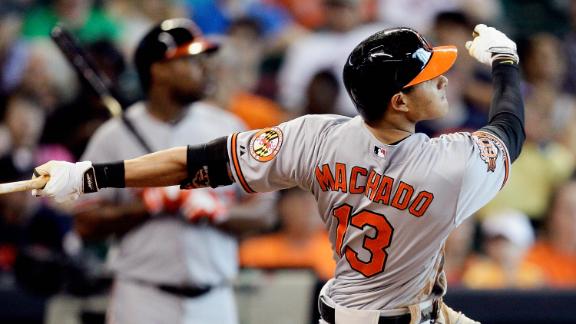 HOUSTON -- Baltimore Orioles outfielder Nelson Cruz left Sunday's game against the Houston Astros with a bruised left hand after being hit by a pitch in the third inning.

Cruz entered the game hitting .315 and has a major league-leading 20 homers and 52 RBIs.

Cruz was hit by Scott Feldman on the side of his left hand in the third inning. He was checked by a trainer before taking first base and remained in the game before he was replaced in right field for the bottom of the third inning. David Lough moved from left to right field and Delmon Young entered the game in left field.

The team said X-rays were negative, and Cruz is listed as day to day.

"Anytime you get hit in the hand you get concerned," Cruz said. "I tried to stay but I wasn't able to grab the bat. So hopefully (Monday) I'll be good."

The Orioles open a series at Texas, where Cruz spent the last eight seasons, on Tuesday. Manager Buck Showalter expects Cruz to try to play when the series begins.

"He's going to be sore," Showalter said. "If I know Nelson, he's going to want to play on Tuesday. It's got nothing to do with who we're playing. He just likes to be there."