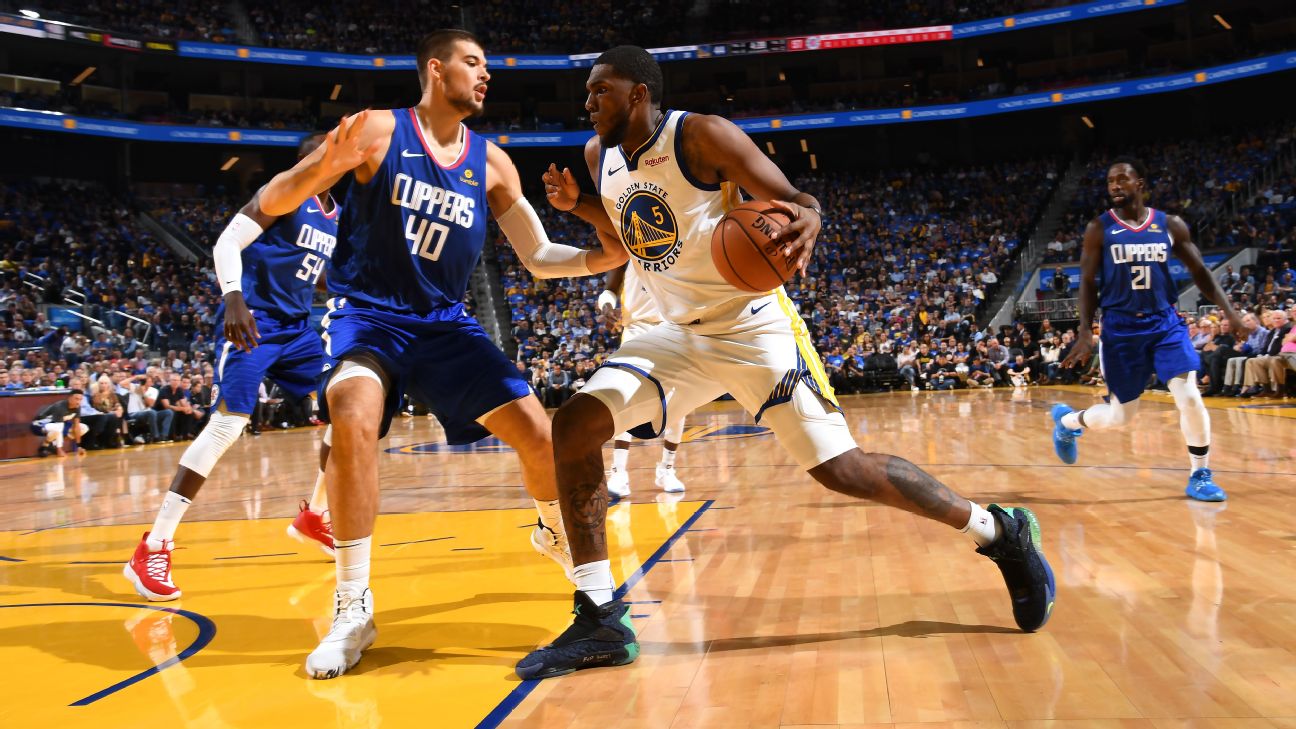 OKLAHOMA CITY -- Golden State Warriors center Kevon Looney will miss at least the next two games and see a team of specialists to evaluate what the organization said Saturday is an ongoing presence of a neuropathic condition in his body. Looney missed almost all of training camp as he dealt with a right hamstring injury and played only 10 minutes in Thursday's loss to theLA Clippersbefore he was taken out for what was termed "precautionary reasons." The Warriors believe the nerve condition is a "direct correlation" to the hamstring issue.

"It's not really his hamstring," Warriors coach Steve Kerr said. "It's kind of a neuropathic condition that he's had for a couple years. It's something he's been able to play through, but in this particular case, the condition is affecting his hamstring. His hamstring is sound, the MRI is clean, but it makes it trickier actually that it's a neuropathic condition. That's really all I'm going to say on it because I have no idea what I'm talking about when it comes to these matters."

Kerr spoke with uncertainty in his voice as he updated Looney's condition. The issue for the Warriors is that they don't know exactly what's going on and they don't know how long the popular big man will be out.

"He's going to see a specialist," Kerr continued. "[We're] feeling really, really bad for him. He's such a great human being, great player, one of my favorite guys I've ever coached because he's not just low maintenance -- he's zero maintenance. He just comes in and does his work, and you just want a guy like that to flourish. He should be entering the prime of his career -- and hopefully he's got many years ahead of him, but we'd love to find some answers. Hopefully sooner rather than later and get him back on the floor."

The Warriors desperately need Looney on the floor, given the lack of big-man depth with which they came into the season. VeteranWillie Cauley-Stein missed all of training camp and remains out because of a foot strain, so the onus will be on young big men Eric Paschall, Omari Spellman and Marquese Chriss to pick up the slack in Looney's absence.

"Just putting Eric and Marquese and Omari in the fire," Warriors guard Stephen Curry said. "That's going to be helpful for them throughout the course of the season when they're called upon to play significant minutes -- and see the right pictures on the floor, especially defensively. I remember my rookie year, there was no better way to learn than to just be out there and go through, get those reps in games, so it's going to be fun to watch them. We got to help them. We got to communicate."

Cauley-Stein went through practice with the Santa Cruz Warriors on Saturday and is expected to stay with the Warriors' G League affiliate for a few days as he continues his injury rehab. Kerr also noted that Draymond Green will get a few more minutes at the center spot as the Warriors adjust the center rotation on the fly. Green injured his right forearm during Thursday's loss, but he went through Saturday's practice without issue and will play Sunday against the Oklahoma City Thunder.

"He'll contribute at the center position, and we can play Eric at the 4, so that has to be an answer, part of the answer," Kerr said. "But no matter how you slice it from a size standpoint, it's a lot to handle. Typically, we've played Draymond at the 5 over the years for 10 minutes a game. We've never really asked him to do that for huge minutes. We've done it to play in spurts or to generate pace and that sort of thing. But asking Draymond to guard Steven Adams for 30 minutes wouldn't make much sense. So we've got to mix and match and find different combinations and things to do, and we'll go from there."

As a group, the Warriors are hoping the tests Looney goes through over the next few days come back clean -- but the concern on Kerr's face was obvious as he spoke about one of the group's most popular players.

"Loon, he knows what he's doing out there," Curry said. "He knows where to be. He's been with us for a long time and been in some pretty high-intensity games. Those other guys have to step up in his absence ... myself, Draymond and Loon have been here through these championships, and you want to have us out there as much as possible throughout the year, but if not, it's just an opportunity. In this league, you've got guys who can surprise you with opportunities, so we'll see how it goes."
Report a correction or typo
Related topics:
sportsespngolden state warriorsnbakevon looney
Copyright © 2020 ESPN Internet Ventures. All rights reserved.
More Videos
From CNN Newsource affiliates
TOP STORIES
Glass Fire updates: More than 10,000 structures threatened