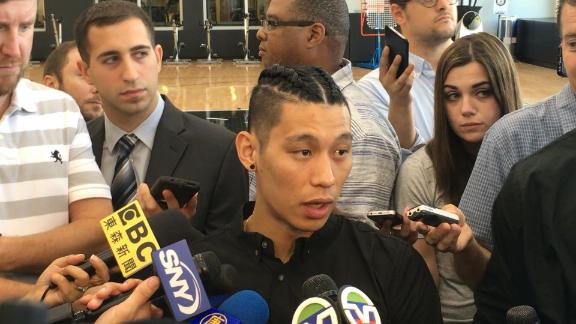 ESPN
By Mike Mazzeo
NEW YORK -- Brooklyn Nets point guard Jeremy Lin has embraced becoming a role model in the years following "Linsanity," but he doesn't want to be simply referred to as a phenomenon.

"Everything happened overnight," Lin said Wednesday at a news conference. "When [Linsanity] first started, I am not going to lie, it was cool. Then it became a burden because I didn't know what I had gotten myself into. I didn't know how big things had become. One, two, three years removed, every year I embrace it more, every year I am more appreciative, every year I love it more and that is where I am right now."

Lin, who signed a three-year, $36 million contract to play in Brooklyn and reunite with former coach Kenny Atkinson, had his stunning 11-game run of dominance with New York in 2012 after being on the verge of getting released. During that stretch, he averaged nearly 24 points to go along with nine assists.

"I'm in a much, much different place mentally as a person than I was when I was with the Knicks," Lin said. "So when you talk about that platform, I want to embrace it. I am not just saying Asians. If you look at what is going on in the world and a lot of violence that is going on in the world in terms of the justice system and all of these different things that is real life. That is so much bigger than basketball. I have a voice because of basketball to be able to talk and influence [people] and do things that are related to things that are affecting people's lives and things every day. That is a very unique situation."

Asked specifically if Linsanity will be making a return to Brooklyn, Lin responded, "I will be myself but I don't really draw too many comparisons to Linsanity the phenomenon. I am just going to keep playing. People will always kind of compare me to that. In a lot of ways, not in a negative way or a way that I am offended but it kind of dehumanizes me to refer to me as a phenomenon. I am going to be here, keep playing my game, do the best that I can and whatever you guys want to call it, that is up to you guys."

Lin, who wore his hair in braids, is ready to take the next step as a player in an expanded role with the rebuilding Nets, who are coming off a 21-61 season.

"I met with my agents and family and close friends and they said what do you want and I said I want to see how good I can be," Lin said. "I have played a lot of different roles; I have sacrificed for a lot of teams that I have been on in the past and I have taken on smaller roles to try to help the team succeed.

"Now I have that chance to take a much bigger role and be a much bigger part. It is no surprise to anybody if you look at the numbers my whole career, when I have the ball in my hands, when I play longer minutes, when I am more comfortable, when I am empowered, I play better. And I am hoping I can take that next step as a player and hoping that I can help this team grow. I want to make my teammates better and make the game easier for everybody. I guess that is what will define me as a player."

The Nets don't have total control over their own first-round draft pick until 2019. But Lin is hoping to be part of their turnaround.

"I made this analogy earlier, but for me, the way I was thinking of free agency was like when you invest in a startup company," Lin said. "You don't necessarily look at the product right then and there. That is a big part of it, but you're kind of betting on the founder a lot of times. You're betting on what that person is capable of doing, because sometimes as you go through the process, the final product is going to change a lot. That's very common in startups and I feel like that's the kind of how this is.

One thing Lin would've done during Linsanity was enjoy it a bit more.

"I'm big on kind of learning from my mistakes and one of the biggest mistakes I made from New York was not soaking everything in and enjoying it," Lin said. "I was so focused on the next thing, the next goal, the next game, the next season, the next level. I was never really was able to just pause and enjoy that moment, and I think for me now, even this, a press conference or something, I don't know how many more years I'm going to be able to play, and something small like this, maybe I just would've brushed over or kind of briefed through in the past, now I'm trying to just take in a little bit."
Related topics:
sportsespnlinsanitynbajeremy linbrooklyn nets
Copyright © 2020 ESPN Internet Ventures. All rights reserved.
More Videos
From CNN Newsource affiliates
TOP STORIES