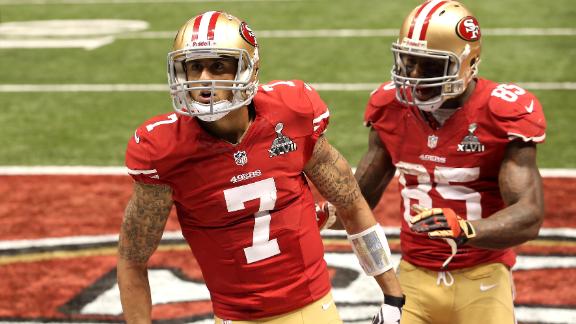 SANTA CLARA, Calif. -- Vernon Davis took the field for an offseason workout this week and spied what he thought was a new quarterback for the San Francisco 49ers.


Colin Kaepernick, who spent the past two months working on his mechanics in Phoenix with the likes of QB coach Dennis Gile and two-time league MVP Kurt Warner, just looked so, well, changed.

"I didn't even know that was Colin," Davis said to laughter Friday at Levi's Stadium. "No, seriously. He was working on his dropback and I was just, 'Who is that?'


"You guys are in for a treat. He looks like a totally different guy. I think it was really genuine and I think he's just a class guy. It shows that he's humble, for him to go to someone and work on his craft and get better. And it shows that his approach to this game, he's just relentless.


"He just wants to be great and I respect that. And that's another reason why I'm in this building today."


So what did Davis tell Kaepernick when he realized it was his teammate?


"My God, what have you been doing?" Davis said.


Yes, this may sound like the beginning of the typical offseason hype fest that permeates teams as they get into their first week of offseason training programs. But by all accounts, Kaepernick took well to the fine-tuning of his dual-threat skill set.


And no, there was no trepidation on Kaepernick's part about changing five years into his NFL career.


"You have to be able to change and adapt to be the best player you can be."


Kaepernick, whose total quarterback rating fell from 68.6 in 2013 (sixth in the league) to 55.9 last season (17th) even as he passed for a career-high 3,369 yards, would not go into specifics about what he worked on. He said he picked up some "knowledge" while admitting it was more detailed work than he's done in the past.


"Not just mechanics-wise," he said, "but mentally, as far as the approach."


Kaepernick said he was joined at the Exos workout facility by Niners receivers Quinton Patton and Bruce Ellington, as well as Australian rugby star Jarryd Hayne, who is embarking upon his American football dream with the 49ers.


Why, exactly, did Kaepernick feel the need to alter his offseason approach?

New head coach Jim Tomsula, meanwhile, was quick to defend his quarterback, even if he has yet to see the purportedly new and improved Kaepernick throwing the ball. CBA rules prohibit coaches from interacting with players on the field during this phase of the offseason program.


"Colin Kaepernick was not broke," Tomsula said. "None of us had a good season last year, OK? And we're not going to spend a lot of time talking about last year, OK? We've got one of the most prolific quarterbacks in the National Football League sitting next to me, all right? This is a guy that went out and busted his tail. He took good and made it better. That's what he did.


"We didn't go out to fix something that wasn't broke in Colin Kaepernick."