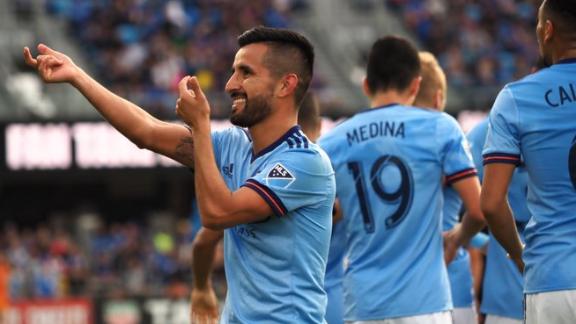 New York City FC rallied to beat the San Jose Earthquakes 2-1 at Avaya Stadium on Saturday night thanks to two second-half goals and some superb goalkeeping from Sean Johnson.

The visitors took the field without David Villa, the NYCFC talisman -- just two goals shy of 400 in his career for club and country -- a late scratch after feeling something in warmups. He was replaced byJo Inge Berget in Patrick Vieira's lineup.

San Jose was up in the third minute after Yefferson Quintero.headed a Magnus Eriksson corner into the NYCFC goal from the near post to make it 1-0.

NYCFC then took the lead on the hour mark, afterAnton Tinnerholm smashed a first-time half-volley pastAndrew Tarbell and Maxi Moralez scored from aIsmael Tajouri assist courtesy of a wicked deflection to make it 2-1 in the visitors' favor.

Johnson played a big part in preserving his team's three points as the game wore on, repeatedly turning quality Quakes chances away in the last 20 minutes.

And Vieira's team held on through a full seven minutes of stoppage time to take home a valuable win in this young MLS season.