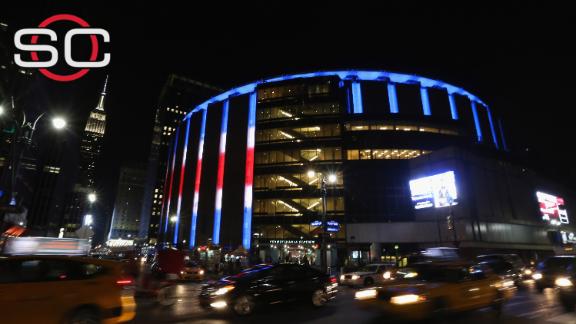 For the first time in nearly 20 years, professional mixed martial arts is set to become a legal activity in the state of New York.

The New York State Assembly passed a bill Tuesday that lifts a ban on professional MMA that had been in place since 1997. The bill passed by a vote of 113-25. It required 76 votes to pass.

Assembly members offered a wide range of opinions on the bill and MMA itself.

Daniel J. O'Donnell referred to it as "nearly naked, hot men rolling around." Charles Barron, who opposed the bill, referenced American slavery and brain trauma. Some advocates of the bill outlined the economic impact of legalizing MMA as well as its potential virtues.

Some expressed a personal lack of interest in MMA but pledged support of it nonetheless. Assemblyman Michael Benedetto referred to it as a "nasty" sport but still voted in favor of ending the ban.

The result ends a long battle by the the sport's leading promotion, UFC, to legalize MMA in New York. The state Senate had passed a similar bill in each of the past seven years, but this was the first time it made it to the Assembly floor.

"This has been a long time coming," UFC CEO Lorenzo Fertitta said in a statement.

The UFC took to Twitter to thank the state legislature for passing the bill.

The UFC has repeatedly stated it intends to host multiple events per year in several locations in New York and could land in Madison Square Garden before the end of the year.

The bill still requires the signature of Governor Andrew M. Cuomo, which should be a formality. Cuomo already expressed his support for the sport this year by including professional MMA revenue in his proposed budget.

"While there are still additional steps that have to occur before professional MMA becomes a reality in New York, I want to assure our fans that if Governor Cuomo signs the bill into law and the State Athletic Commission puts in place the appropriate regulations, we look forward to hosting our first New York event in the world's most famous arena -- Madison Square Garden," Fertitta said. "We also look forward to scheduling events in Buffalo, Rochester, Syracuse, Utica, Albany, and Brooklyn. We are excited."

MMA will fall under the jurisdiction of the New York State Athletic Commission. The NYSAC has 120 days to adopt the necessary statutes to regulate the sport.

An often overlooked aspect of the bill is that it also regulates MMA on an amateur level. Under previous law, New York state officials did not oversee amateur MMA, which meant there were no safety guidelines, such as pre-fight physical examinations or ambulances and physicians on site.

The UFC turned to a number of measures in its effort to host a live event in New York. The promotion filed suit against the state in 2011, essentially challenging the validity of the Combative Sports Law of 1997 on the grounds it infringed on First Amendment rights and was unconstitutionally vague. Until Tuesday, New York was the only state in the U.S. where professional MMA was banned.

Another lawsuit was filed last September. The UFC also filed for a preliminary injunction that would have allowed a live UFC 198 event to take place April 23 at Madison Square Garden. That injunction was ultimately denied.

MMA in New York received an unexpected boost in February 2015, when former Assembly Speaker Sheldon Silver, who was publicly against MMA, was indicted on fraud charges and replaced by a former sponsor of the bill, Carl E. Heastie.

There are several prominent New York natives on the UFC roster, including former champions Jon Jones and Chris Weidman. Before the ban in 1997, the UFC held one live event in September 1995 in Buffalo, New York.

Of course, the bill paves the way for all professional MMA promoters to host live events in New York.

Bellator MMA president Scott Coker expressed his desire to promote an event there.

"The New York Assembly's vote to legalize MMA is a watershed moment for this incredible sport," Coker said. "As someone who has been promoting combat sports for more than 30 years, this is a very exciting time for MMA. We at Bellator MMA are very much looking forward to hosting an event in the 'Crown Jewel of America,' New York. Two Bellator champions, Liam McGeary and Marcos Galvao, call New York home and it means a great deal to the both of them.

"We've already been in contact with the great people at the Barclays Center and several other incredible venues and we can't wait to bring our world class athletes and action packed shows to an arena in the Empire State soon."

"This is an exciting and historic day for our great sport. Those who have been lobbying for the legalization of MMA in NY State, including World Series of Fighting's new COO Michael Mersch, should be commended for their persistence and commitment to seeing through the passage of legislation that will finally allow fans to watch live MMA in the Empire State, and fighters to compete there."