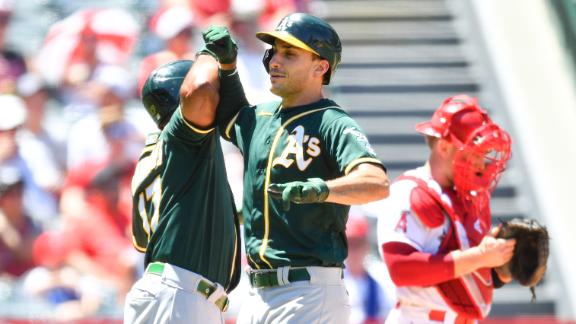 Gomes, acquired from Washington at the trade deadline Friday, hit a two-run homer. Marte joined the A's a couple days earlier in a trade with Miami.

Drafted as the 37th overall pick in 2016, Jefferies had pitched just once previously in the majors, losing in a shaky start last year with no fans. Promoted from Triple-A Las Vegas for this outing, the 25-year-old righty did much better.

"Last year was kind of weird, but I knew this start would mean a whole lot more to me and my family because they could be here," Jeffries said. "It was my mom, dad, brother, aunts, uncles, friends. Everyone was here except my dog, I think."

Jefferies said he could hear his mom cheering for him.

Matt Olson hit a three-run homer, his 28th, in the third and Gomes connected later in the inning for his 10th and a 5-3 lead.

"It was definitely a dream come true," Detmers said. "Obviously, I've been dreaming of that moment since I was a kid. It didn't go as planned. But hey, that's baseball. I'm looking forward to my next start. I was enjoying the moment. I got to see family after the game. That was a cool moment."

Detmers hugged his parents, brothers and girlfriend after the game.


Marte scored twice, drew a walk and increased his steal total to 26.

Max Stassi had a two-run homer for the Angels, who had just five hits. Shohei Ohtani went 0 for 4 and grounded into two double plays. Josh Harrison, also acquired in the deal with Washington, turned those two double plays.

Angels manager Joe Maddon saw Detmers in the clubhouse before the game and shook his hand. He simply congratulated him and told him to have fun.

Detmers retired leadoff batter Mark Canha on a fly ball and then walked Marte, who stole second and third. Detmers struck out Olson and Jed Lowrie to escape, but it took him 28 pitches to get through that frame.

With Mike Trout injured, he usually sits next to Maddon in the dugout for the first few innings of games and you'll often see the two talking, whether it's golf, the Eagles, trades or the vibe of the clubhouse.


"He feels as if it's as good as it's been in a long time and that's good to hear from him. I trust him," Maddon said of Trout's assessment of the clubhouse. "Mikey has no agenda. He's as pure as a New Jersey snowfall. He's as superstar, a player and human being. I really enjoy my conversations with him. It could be about anything."

Angels: Ohtani (right thumb) will next pitch at the end of the Texas Rangers series next week (Aug. 2-5) or beginning of the Dodgers series (Aug. 6-8) at the earliest, according to Joe Maddon ... OF Mike Trout (right calf strain) is feeling better but there's still no timetable for his return. He was injured May 17. ... INF Anthony Rendon (left hamstring strain) is doing work in the training and weight rooms but still no baseball activity ... All-Star 1B Jared Walsh (right oblique) is progressing and should be the first of these three injured players to return.

Athletics: LHP Sean Manaea (8-6, 3.01 ERA) will start Tuesday against the San Diego Padres. He had a fantastic outing against the Padres on July 28 as he threw six scoreless innings, allowing just one hit while striking out nine and walking just one.