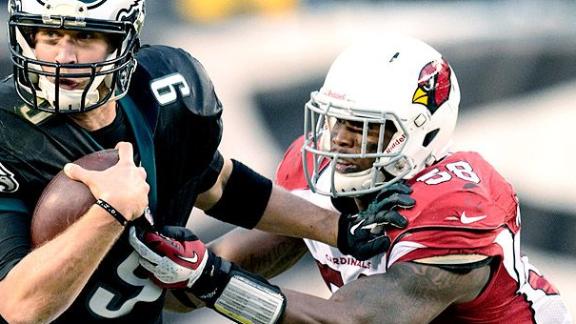 Arizona Cardinals inside linebacker Daryl Washington will be suspended for the 2014 season for again violating the league's substance abuse policy, the NFL announced Friday.

An apologetic Washington, whose suspension begins immediately, said in a statement released through agent Jordan Woy that it was a result of marijuana and that he is "committed to making changes in my life that will allow me to return to the NFL as soon as possible."

He missed four games last season for a previous violation. He also was facing another suspension for violating the league's personal conduct policy after he was arrested in May 2013 on two counts of aggravated assault after a confrontation with his ex-girlfriend.

He pleaded guilty to those charges in March and was sentenced to one year of supervised probation in April.

"It's completely unacceptable that Daryl has once again put us in this position," Cardinals general manager Steve Keim said in a statement. "We all know what the consequences are and will deal with them.

"From a personal standpoint, our hope is that this suspension will give Daryl the opportunity to accept the necessary help and guidance to get his life back on track, and we will certainly support him however we can."

In 12 games last season, Washington was third on the team with 81 tackles (59 solo), 3 sacks and 2 interceptions.

"As it pertains to our team, our approach is the same as it's always been: next man up," Keim said in the release. "... One player's absence is another's opportunity. That approach has served us well in the past and we will rely on it now."

Old news to us, new news to y'all. My team and I continue to stay focus. Working every day and building chemistry and a winning attitude.

In March, Arizona exercised a $10 million option to keep him on the roster. Washington received $5 million then and the deals calls for him to get the other $5 million next March.

In 2012, he led the team with career highs of 140 tackles and nine sacks and made the Pro Bowl.