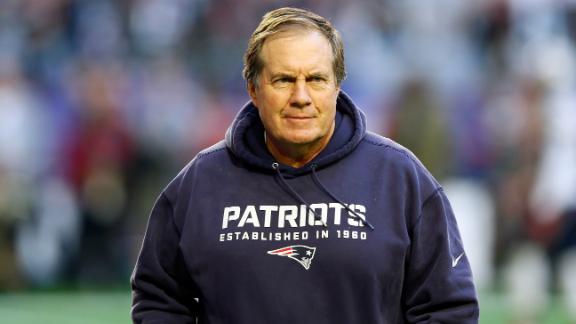 Hot on the heels of Bill Belichick's latest plea to add extra end-zone cameras, NFL researchers are on Monday set to begin studying ways to add fixed cameras on all boundary lines for replay.

NFL.com reported Sunday that the league is set to begin research and development of the Patriots' proposal to place fixed cameras on goal lines, end lines and sidelines to ensure reliable angles for replay.

The website said that the league specifically wants to gather more information on the technology required to best incorporate the fixed cameras into the replay systems that makes it consistent in all 31 stadiums.

The source -- who was in the meeting with NFL head of officials Dean Blandino, among others -- said Belichick expressed concern that the league is willing to spend top dollar to send the Pro Bowl to Brazil and play regular-season games in London every season but doesn't appear willing to spend the money to pay for the extra cameras it would take to cover all end zone angles to assist instant replay.

Adding replay cameras is a topic that Belichick has lobbied for at length in recent years. The Patriots repeatedly have proposed that fixed cameras be positioned on all boundary lines to supplement camera angles provided by broadcast networks, but their ideas haven't garnered much support, with some in the NFL citing cost.

"It's disappointing every year we can't afford that, as a league," Belichick told reporters Tuesday. "They brought that up as a concern. It was kind of surprising to hear that."

Information from ESPN.com Patriots reporter Mike Reiss was used in this report.