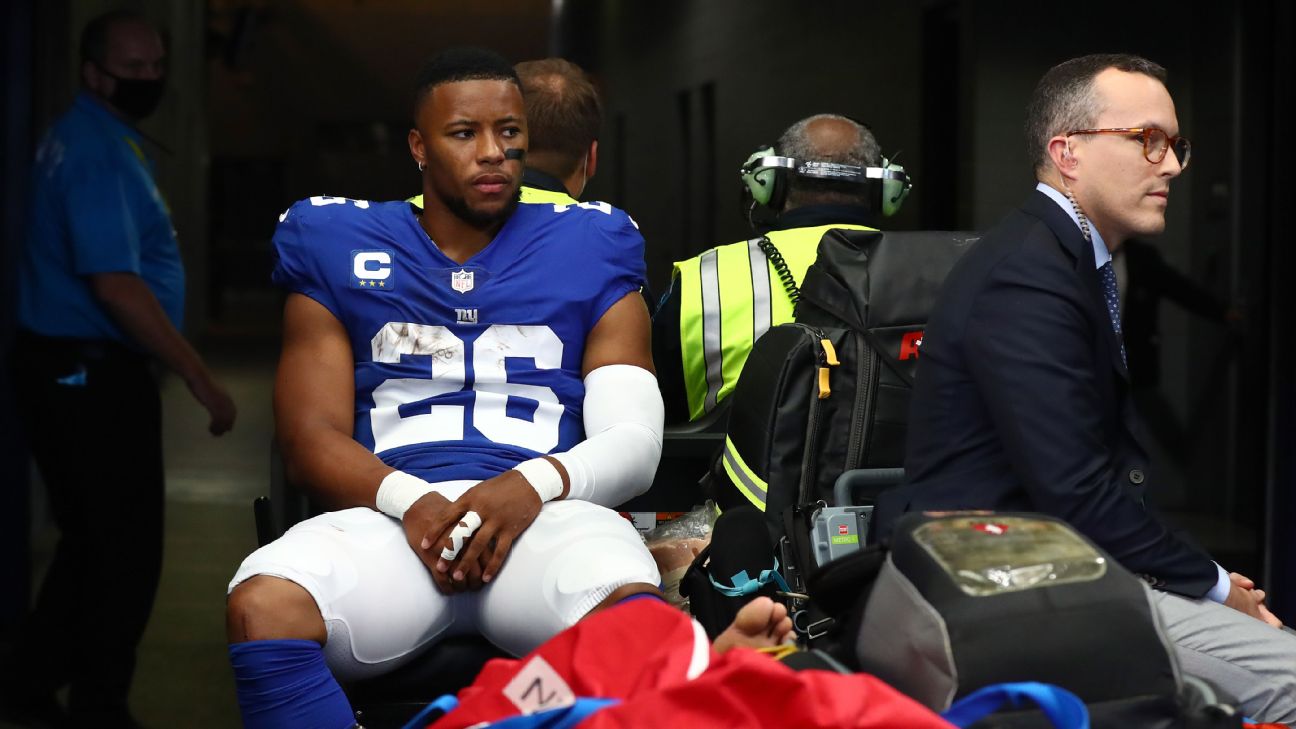 The NFL season is on Chapter 7, and teams are starting to find their identities as they trudge along each week. Some teams understand that they are not among the league's elite, while others are still trying to make the case that they belong in that conversation. Injuries have been a constant variable among teams this season.

Entering Week 7, many teams are having to manage their rosters after learning of ailments to their players. Cleveland Browns quarterback Baker Mayfield is dealing with many issues to his left shoulder, which kept him out of Thursday's 17-14 victory over the Denver Broncos. The Indianapolis Colts suffered a big blow in the secondary, as safety Julian Blackmon tore an Achilles in Wednesday's practice, knocking him out for the season.


Additionally, the Tennessee Titans lost rookie Caleb Farley for the year after the cornerback tore an ACL in his team's Monday night victory over the Buffalo Bills -- heartbreaking news given how many injuries he has already endured at just 22 years old.

Before the weekend action kicks off, our NFL Nation reporters are back again with critical injury updates for key players.

The Falcons will be without their best edge rusher, Dante Fowler Jr., on Sunday against theMiami Dolphins. Fowler has two sacks -- and two forced fumbles on those sacks. He's the team's most explosive pass-rusher and a player opposing offenses need to pay attention to. Atlanta might look in multiple directions without him in the lineup, including more playtime for veterans Steven Means and Brandon Copeland and rookie Ade Ogundeji.-- Michael Rothstein

Erving was limited Thursday with a neck injury and missed Friday's practice with an illness, so he's questionable for Sunday against the Giants after missing the Eagles game two weeks ago. It wouldn't be a surprise if the Panthers went with rookie Brady Christensen anyway. He started two weeks ago at right tackle, with Taylor Moton moving to the left side to replace Erving, but Christensen is more of a natural left tackle from college. The Panthers just didn't want his first start to be on the left side.

The play of the line is critical, as coach Matt Rhule vowed to have a vastly different look offensively that relies more on the run. Solid blocking up front could mean a lot for rookie back Chuba Hubbard. -- David Newton

Hockenson is looking to get back on track, and the Lions' coaching staff is making a conscious effort to keep him engaged. He told reporters that he'd be ready to go earlier this week, although he is listed as questionable after being mostly limited in practice all week. -- Eric Woodyard

Swift's groin injury has been getting monitored by the Lions since the start of training camp. He's listed as questionable after limited practice throughout the week, but he will be ready to go.

Smith has never missed a game in his seven NFL seasons. He's 102-for-102, but the outside linebacker's streak will be in jeopardy Sunday. He played only eight snaps last week before dropping out and did not return to practice until Friday, when he was limited and listed as questionable.

Hilton did not practice all week and is out for the game against the San Francisco 49ers because of a quad injury suffered in the fourth quarter against the Houston Texans in Week 6.

Quarterback Carson Wentz will already be without one key receiver, as Parris Campbell might miss the rest of the season with a foot injury. Not having Hilton will put even more pressure on Michael Pittman Jr. and Zach Pascal. -- Mike Wells

The Chiefs expect Jones to be available on Sunday against theTennessee Titansfor the first time since he played in Week 4 against thePhiladelphia Eagles. It will be just the second game this season in which the Chiefs will have both Jones and their other highly paid pass rusher, Frank Clark. The Chiefs have only seven sacks. Jones has two and Clark none. -- Adam Teicher

Jefferson, whose two sacks rank third on the team, missed practice this week, as he was away taking care of a family situation. He is expected back by game time, however, and interim coach Rich Bisaccia said his availability will be decided then. Jefferson has started all six games and also has six QB hits and a forced fumble. If he is unavailable, expect Solomon Thomas, who has 2.5 sacks, to step in as the starter. -- Paul Gutierrez

Dealing with a shoulder injury, Michel did not practice Wednesday and was listed as a limited participant for the remainder of the practice week. However, coach Sean McVay said before Friday's practice that Michel is expected to play against the Lions. In a role behind running back Darrell Henderson Jr., Michel has rushed for 205 yards and a touchdown on 54 carries in six games. -- Lindsey Thiry

Even if it were only Howard questionable for Sunday's game, his absence would be a big loss for the Dolphins. But joining him on the questionable list are fellow cornerback Byron Jones and former first-round pick Noah Igbinoghene -- meaning Miami could be down three corners when it hosts the Falcons this week. If all three are sidelined, it is a blowup spot for everyone on Atlanta's offense. -- Marcel Louis-Jacques

Jones is the Patriots' top slot cornerback, so his absence from the game (he was ruled out Friday) has a trickle-down effect when considering theNew York Jets' passing attack and potential big plays for veteran Jamison Crowder, rookie Elijah Moore and others on the inside part of the field. In addition to Jones, the Patriots could be without starting DT Davon Godchaux (finger) and starting LB Dont'a Hightower (elbow/ankle). -- Mike Reiss


Hill was ruled out of Monday night's game at Seattle with the concussion he suffered in Week 5, which essentially eliminates his unique package of plays as a read-option QB/RB/TE/WR. That hurts the Saints even more, considering they have already been thin at RB without backup Tony Jones Jr.and are thin at WR without Michael Thomas and Deonte Harris. At least they have some good news with the expected return of veteran wide receiverTre'Quan Smithfrom injured reserve. But expect the Saints to keep leaning heavily on Alvin Kamara, as usual, especially in potentially nasty weather conditions at Seattle.

Harris was ruled out of Monday night's game at Seattle with the hamstring injury he suffered in Week 5. He'll obviously be missed as one of the NFL's best return men and as a big-play threat, having registered touchdown catches of 72 and 55 yards this year. But he also has become a more dependable midrange target as his offensive role continues to expand.--Mike Triplett

Barkley will be out another game after injuring an ankle against the Dallas Cowboys in Week 5. Devontae Booker will continue to be the primary back, but that's only the beginning of New York's injuries on offense. -- Jordan Raanan

The G-Men will be without their most talented receiver in Golladay this week, further limiting the firepower in New York's offense. Sterling Shepard is predicted to be the No. 1 option, but he is also dealing with a hamstring injury that could impact his effectiveness.

Toney is the second pass-catcher who will miss the Giants' contest against the Panthers. His ankle injury hasn't healed enough, which means quarterbackDaniel Joneswill be without three of his top playmakers -- not to mention he won't have LT Andrew Thomas protecting his blind side, as he is also out because of injury.

Williams was a surprise addition to the injury report this week after speaking to the media and participating in practice on Monday, where he apparently aggravated the ankle issue that began in the loss to the Arizona Cardinals. But he didn't practice Wednesday, Thursday or Friday and is listed as doubtful for Sunday night against the Colts. That would be a big loss for the 49ers, who will turn to rookie Jaylon Moore if Williams is unable to play. And with quarterback Jimmy Garoppolo returning from his own calf injury and Trey Lance unavailable with a sprained knee, protection will need to be at even more of a premium than usual.-- Nick Wagoner

The groin injury that Alex Collins suffered last week in Pittsburgh cut short his 101-yard performance and kept him from practicing so far this week. He was listed as a non-participant Thursday and Friday, putting his status for the Seahawks' must-win Monday night game vs. the New Orleans Saints in doubt. Seattle is still without Chris Carson (neck), who's on IR for at least two more games, but Rashaad Penny (calf) is back at practice and expected to be activated off IR to play against the Saints. -- Brady Henderson

Jackson was limited in practice on both Wednesday and Thursday but did not participate Friday. Instead, he worked on a side field with trainers. He's listed as questionable. Jackson has been inconsistent in his first season with Washington as he adjusts to a new scheme and techniques. But it would still be a loss for Washington. If he can't play, rookie Benjamin St-Juste would start in his place alongside Kendall Fuller. Washington already lost corner Torry McTyer to a torn ACL, so its depth isn't great. Danny Johnson or Corn Elder might see action if Jackson can't play. -- John Keim 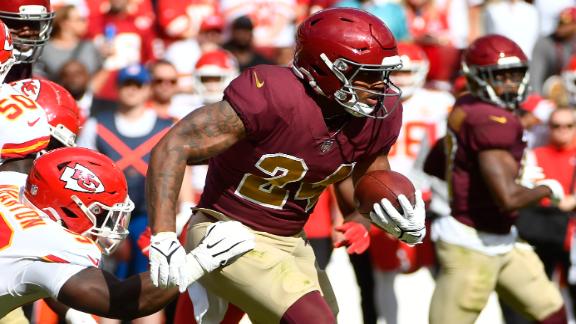