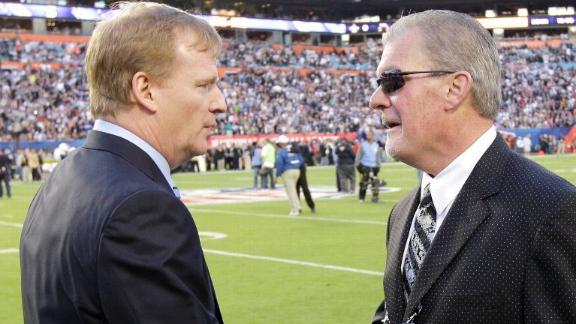 INDIANAPOLIS -- A day after Washington Redskins safety Ryan Clark talked about the hypocrisy of the NFL -- and specifically commissioner Roger Goodell -- on ESPN's "First Take," NFLPA president Eric Winston said team owners need to be held to a higher standard.

Players have been critical of Goodell after he allowed Colts owner Jim Irsay to pitch Indianapolis' Super Bowl bid during the league's owners meetings earlier this week in Atlanta.

Irsay was arrested March 16 for allegedly operating a vehicle while intoxicated.

"I don't understand why the discipline for an owner of one of these 32 teams that hold the shield of the league is compared to a 22-year-old kid," Winston told Pro Football Talk Thursday. "That's what I don't understand, is why are we trying to compare? To me, there should be a much higher standard for an owner, there should be no doubt because I think he represents that team, and that's what we've always said about the shield, right?

"To me it's not an apples-to-apples situation, it's a situation where we have an owner who has unfortunately gotten into some trouble, and I don't understand why we're trying to compare it to ... a player. This guy is an owner of a National Football League team, and to me that should mean so much more and in a way that he should be held to a much higher standard. And that's just my opinion of this situation."

Goodell has remained adamant that he will wait until the legal process plays out before deciding what course of action to take with Irsay, who had $29,000 in cash and bottles of prescription drugs in his vehicle at the time, according to police. He faces four felony counts of possession of a controlled substance.

On the final day of the meetings, when asked about Irsay's situation, Goodell said: "There have been no charges. So the answer is, until we have more information or more facts, we will let it play out."

"Players are looking very closely at this situation," Winston, who is not on an NFL roster right now, told Pro Football Talk. "They're looking and they're waiting to what happens. I've fielded the calls and I've talked to the guys. They're not happy with the way this system works, and they're not happy with the way the process really works. ... These players are going to have a very keen eye on seeing how the commissioner deals with this and what kind of suspension or punishment, if any, ends up being leveled on Mr. Irsay."