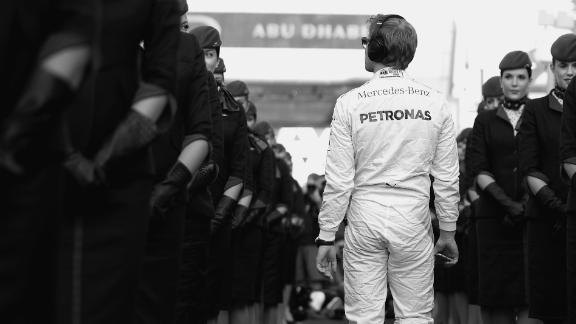 The German, who needed a podium finish to secure the title, weathered a tense opening two stints of the race and made a decisive overtake on Max Verstappen at mid-distance to consolidate second position. In the closing stages title rival Hamilton attempted to back his teammate into the chasing Sebastian Vettel and Verstappen, despite several instructions to speed up from the Mercedes pit wall. But it was to no avail as Rosberg held on to finish just 0.4s behind Hamilton and secure the championship.

The title win means Rosberg follows in the footsteps of his father, Keke, who won in 1982, and makes him the second second-generation world champion after Damon Hill. Yas Marina's dramatic finish capped a season which has ebbed and flowed between the Mercedes drivers and means Hamilton has won the final four races of the year without claiming the title.

Hamilton's tactic of backing Rosberg toward the chasing pack was hardly surprising considering he came into the weekend as clear underdog. At the chequered flag the top four were covered by just 1.6s, one of the closest finishes in recent memory and a fitting climax to a close season between Mercedes' drivers, who have shared 19 of the 21 victories this season.

Hamilton led away cleanly from pole at the start, getting into Turn 1 ahead of Rosberg, who stayed ahead of the Red Bulls and Ferraris. Behind, Verstappen tapped the sidepod of Nico Hulkenberg and spun around, though he avoided the wall and rejoined in last. Red Bull teammate Daniel Ricciardo dropped behind Kimi Raikkonen at the start as the Finn took advantage of superior grip from his ultra-soft tyres.

In the opening stint, Hamilton did what many expected ahead of the weekend, backing Rosberg into the pack and not opening up a gap. He pitted very early, coming in on Lap 7 for soft tyres, though his stop was delayed slightly for Raikkonen -- who also took softs from third position. All eyes were then on Rosberg's in-lap, and the German also found himself held in the box as compatriot Sebastian Vettel came in behind him. Despite the delay Rosberg emerged marginally ahead of Raikkonen and managed to hold second position.

Rosberg then had to deal with the attentions of Verstappen, who was yet to pit and now acting as rear-gunner for Red Bull as they hoped to bring Ricciardo back into proceedings. Ricciardo pitted earlier than expected, however, coming in on Lap 9, and emerging in a tight train of cars behind his teammate. Rosberg, being warned not to take any risks against Verstappen, held station in third. It soon became apparent Red Bull and Verstappen were thinking of a one-stop strategy.

The key moment for Rosberg came on Lap 19. Shortly after being given a message that he had to pass Verstappen in the next few laps, the two men nearly touched as Rosberg went wheel-to-wheel with the teenager through the second chicane, with Rosberg getting a better exit out of Turn 9. Rosberg then got ahead through the kink at Turn 10 to make the move stick. Two consecutive fastest laps afterward would prove crucial at Rosberg's next stop, when he emerged ahead of the Red Bull driver, whose one-stop strategy had moved him into podium contention.

What followed was a final roll of the dice for Hamilton. With Vettel also going for a longer second stint in the lead, Hamilton started to back Rosberg into the chasing Red Bulls behind, despite several hurry-up messages from the Mercedes pit wall. Vettel's pit stop on Lap 37 elevated the Mercedes pair back into a 1-2 -- the Ferrari emerged in sixth behind Verstappen, Ricciardo and Raikkonen but on the super-soft tyre. Hamilton got another message on Lap 43, saying Vettel, now just 10 seconds down the road, was "an imminent threat" to the lead.

By the 47th lap, Mercedes was instructing Hamilton to up the pace, with the world champion replying: "I suggest you guys let us race," as Vettel continued to close in for Ferrari. The Ferrari driver soon became a bigger concern as he caught and passed Ricciardo in fine style, with Hamilton's pace dropping further as the red car got closer and closer.

Hamilton's tactics set up a grandstand finish, with Verstappen and Vettel edging ever closer to the leading Mercedes drivers. Executive director (technical) Paddy Lowe even got on the radio to instruct Hamilton to speed up, to which the world champion replied he was doing the only thing he could to win a fourth title. As the laps ticked down, Vettel soon eased past Verstappen and found himself staring down the gearbox of Rosberg. With third position enough for a first championship, Tony Ross reminded his driver not to do anything stupid if Vettel got close -- though he never did.

Rosberg did not put a foot wrong, driving flawlessly under immense pressure in the closing laps to cross the line as the 2016 world champion. The German driver held his head in his hands on the cool-down lap, then celebrated the win by performing some Vettel-esque donuts with his car opposite the main grandstand before returning to parc ferme.

Behind the front four, Ricciardo and Raikkonen soon faded when Vettel's and Verstappen's one-stop strategies propelled them toward the front. Raikkonen had been running third early in the race but soon faded when he was kept on the two-stop strategy, meaning he soon gave up valuable track position to the one-stopping cars who ended the tail of the warring Mercedes drivers.

Force India capped its season by finishing as best of the rest behind the top three teams, with Nico Hulkenberg signing off his second stint with the team by finishing seventh ahead of Sergio Perez. The result secured what had already been a likely fourth position in the constructors' championships, a remarkable achievement for a team competing on a limited budget compared to the top teams.

A strong drive from Felipe Massa saw him finish ninth on the 250th and final F1 race of his career, one place ahead of former Ferrari teammate Fernando Alonso. Haas narrowly missed out on points at the final race of the year, with Romain Grosjean and Esteban Gutierrez finishing 11th and 12th. Esteban Ocon was next across the line for Manor, though the Force-India-bound Frenchman nearly wiped out teammate Pascal Wehrlein as the pair diced for position with 10 laps to go. Marcus Ericsson and Felipe Nasr finished 14th and 15th to cap a weekend which has seen Sauber struggle, though Manor's failure to score any points means they held on to 10th in the championship.

Jolyon Palmer was the last classified car and his season ended on a sour note, tangling with Carlos Sainz at Turn 17. Sainz would retire two laps later with a gearbox problem, which followed Daniil Kvyat's retirement on Lap 15, capping a miserable weekend for Toro Rosso. Jenson Button's final race ended on Lap 12 after a scary right suspension failure, while Valtteri Bottas and Kevin Magnussen both retired in the opening five laps.