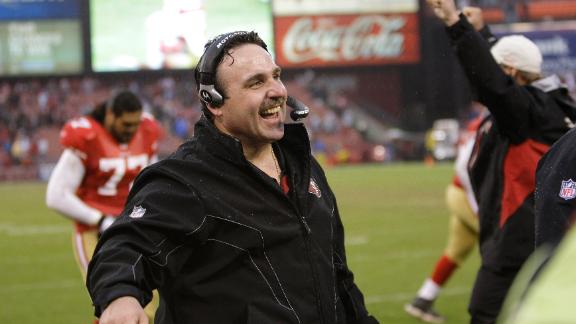 After eight known external interviews, including a second sitdown with one candidate, the San Francisco 49ers are staying in-house.

Jim Tomsula, who has been the Niners' defensive line coach since 2007, was promoted to succeed Jim Harbaugh, the team announced Wednesday. Tomsula, who was the interim head coach at the end of 2010 after Mike Singletary was fired, led the team to a 38-7 win over the Arizona Cardinalsin its final game of the season as it finished 6-20.

"After conducting a thorough coaching search, and meeting with a number of outstanding candidates, Jim Tomsula clearly is the right man to lead this team," CEO Jed York said in a statement. "Jim is a great teacher and a tremendous mentor who conducts himself with great class and integrity."

The well-liked Tomsula, 46, is set to be formally introduced Thursday in a news conference at Levi's Stadium.

York said a day after the season ended that he wanted to find a "teacher" to lead the franchise forward. Certainly a coach familiar with the operation was important as the 49ers build aroundquarterback Colin Kaepernick, who is coming off a disappointing year.

"Our organization is excited to have Jim Tomsula leading this football team," general manager Trent Baalke said. "We have had the privilege of working alongside Jim for the past eight seasons. He is a proven leader, teacher and mentor, and we look forward to seeing him apply his craft and vision to our team."

In tabbing a popular locker room figure in Tomsula, though, the Niners figure to lose defensive coordinator Vic Fangio, who interviewed for the job on Dec. 30. The Niners' defense was its strength in an up-and-down 8-8 season, in which it ranked fifth in the league in total defense.

And there are questions about whom Tomsula brings in to replace offensive coordinator Greg Roman, who left for the Buffalo Bills. Because the Niners' offense tried to reinvent itself last year from a ground-and-pound attack to more of a spread passing offense, Roman's replacement will seemingly have to make better use of the personnel at his disposal.

The promotion of Tomsula represents some continuity as he's been with the Niners for eight-plus years.

"I think for teams to be successful, you have to have as much continuity from year to year as much as possible," wide receiver Anquan Boldin told 120sports.com. "And I think hiring Coach Tomsula gives us that continuity. The less change that you have, I think, the better chance you have to be successful the following year."

Tomsula's only other head-coaching experience came with NFL Europe's Rhein Fire in 2006.

In the early 1990s, Tomsula worked as a sales rep for a medical equipment company, then delivered newspapers and worked as a night janitor and cut firewood to earn extra cash in his early coaching days with a young family.

"It's a good move. I look forward to fighting for Jim Tomsula,"said tight end Vernon Davis, who is a neighbor of Tomsula's -- their kids play on the same flag football team. "Tomsula, just the energy that he provides during the games and having a relationship with him, I can tell that [for] players, he's one of those coachesplayers wouldn't mind playing for. Just his spirit. He's a good guy and a terrific coach. He'll allow you to go out and do whatever you can do. He'll put each and every individual in place to perform at a high level."