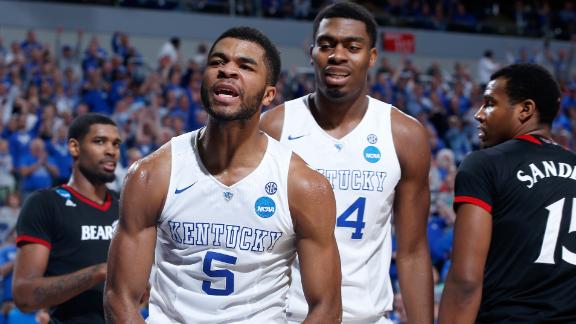 LOUISVILLE, Ky. -- Nothing came easy for top-ranked Kentucky against eighth-seeded Cincinnati, which mixed it up with the Wildcats on almost every play.

They didn't flinch and eventually built a double-digit lead by physically imposing their will on the Bearcats. Kentucky's reward was college basketball's first 36-0 start and a return visit to the Sweet 16 as it cleared an important step in its quest to become the first unbeaten champion since Indiana in 1976.

Aaron Harrison scored 13 points, Trey Lyles added 11 with 11 rebounds and the Wildcats outworked Cincinnati for a 64-51 victory Saturday that showed their resolve even when the numbers worked against them.

Kentucky shot just 37 percent and was outrebounded 45-38 yet always seemed in control because of timely baskets and rebounds that Cincinnati failed to get.

"I always like it when my team shoots 37, 36, 35 percent and wins in double digits," Kentucky coach John Calipari said. "It shows them they don't have to make shots to win. You can miss them all. No, you can't miss them all. You can miss most of them, and you can still win games if you defend, you rebound and you play that way, make your free throws, and they did."

The Wildcats earned their sixth straight double-digit win that helped them surpass last year's Wichita State squad for the most victories to start the season. Kentucky squashed the Shockers' run in the third round last March and now looks to extend its roll in Thursday's Midwest Regional semifinal in Cleveland against the winner of Maryland-West Virginia.

That figures to be tough either way, though Kentucky might be hard pressed to find an opponent as grueling as Cincinnati (23-11). The physical, pesky Bearcats made the Wildcats work hard for every shot and rebound in an intense contest.

But the Wildcats succeeded by making life difficult on both ends for Cincinnati, holding the Bearcats to 32 percent shooting including just 24 percent in the second half. Kentucky blocked six shots after halftime and nine overall while also coming up with key rebounds.

The Wildcats made 20 of 28 free throws, chances created by their aggressive attack of the basket. Cincinnati didn't shoot a free throw until early in the second half and finished 9 of 14 from the line.

"Had we finished a little better down the stretch with some point-blank shots that we had, had we made some free throws, we'd have made it very, very interesting," Cincinnati associate head coach Larry Davis said.

Troy Caupain had 13 points,Shaq Thomas10 and Octavius Ellis had nine with 10 rebounds for Cincinnati, which trailed by 19 points with 1:43 left.

Ellis embodied Cincinnati's attitude against the Wildcats, often adding an extra push after a play or finding a way to make Kentucky foul him as he tried to establish position down low.

But most notable for Kentucky were the timing of some baskets that ended up snatching momemtum, such as Willie Cauley-Stein's emphatic flying dunk and free throw during a 10-0 run just before halftime that brought another sea of blue in the crowd to its feet.

"When he does it, we all scream like we did it," Aaron Harrison said. "We're just used to it."

Aaron Harrison followed with a 3-pointer to cap the run and make it louder, and just like that Kentucky had the momentum it needed in half in which Cincinnati led several times and seemed intent on controlling the flow.

Cincinnati got within three points several times early in the second half, the last time at 35-32 on Ellis' jumper. Hard-fought offensive rebounds created more opportunities, but the Bearcats just couldn't convert as Kentucky came up with timely rebounds.

That's because Kentucky didn't let them.

"I think we did a good job in the first half, and I think we were in the game," Thomas said, "and we just made a couple mental errors that we need to fix. I think we played real physical with them."

Cincinnati: Ellis made the Bearcats' first free throw attempt 10 seconds into the second half. ... Cincinnati edged Kentucky in the paint 32-30 and got 14 second-chance points.

Kentucky: Cauley-Stein and Tyler Ulis each added nine points for the Wildcats, who scored 16 points off 14 turnovers. ... Kentucky improved to 28-10 against Cincinnati.

Kentucky Advances To Sweet 16
Trey Lyles had 11 points and 11 rebounds in Kentucky's 64-51 win over Cincinnati.

Breaking Down Kentucky's Win
Fran Fraschilla breaks down Kentucky's 64-51 win over Cincinnati in the third round of the NCAA tournament and analyzes the potential matchup left that could give the Wildcats the most trouble.

Kentucky Stays Perfect, Reaches Sweet 16
Eamonn Brennan discusses Kentucky's win against Cincinnati to improve to 36-0 and advance to the Sweet 16.

Kentucky Advances To Sweet 16
Trey Lyles had 11 points and 11 rebounds in Kentucky's 64-51 win over Cincinnati.

Breaking Down Kentucky's Win
Fran Fraschilla breaks down Kentucky's 64-51 win over Cincinnati in the third round of the NCAA tournament and analyzes the potential matchup left that could give the Wildcats the most trouble.