No. 1 Kentucky breezes by Auburn to reach SEC title game at 33-0 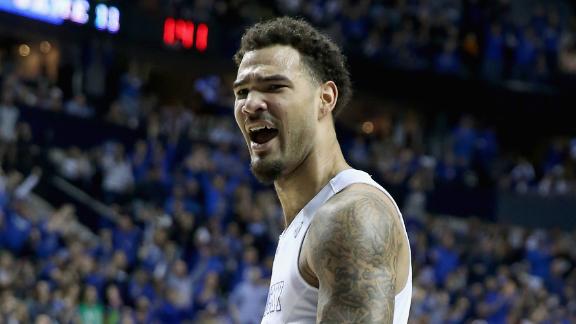 NASHVILLE, Tenn. -- Top-rankedKentuckyreached high gear quickly and poured it on against anAuburnsquad that lost two players in less than 24 hours.

Considering the Wildcats' effectiveness in many areas Saturday in a 91-67 victory that put them in the Southeastern Conference final, chances are a full-strength Tigers squad wouldn't have done much to change it.

Willie Cauley-Stein scored 18 points and Andrew Harrison added 15 to help Kentucky improve to 33-0 and break the school-record winning streak of 32 games set from Dec. 5, 1953, to Jan. 8, 1955. The Wildcats will faceArkansas, seeking their 28th tournament title and first since 2011.

Their effort against the Tigers was certainly a good tuneup.

"It was a good game, a hard-fought game and we played well," said Kentucky coach John Calipari, whose team shot 56 percent and outrebounded Auburn 39-25.

Trey Lyles, Aaron Harrison and Devin Booker each added 12 points for the Wildcats. They led by 28 with 6:04 left.

The Wildcats had their way against a short-handed opponent. Auburn forward Jordon Granger was suspended for fighting in Friday's quarterfinal win overLSU, and the schoolannounced just before the tipoff that forward Cinmeon Bowers had been suspended for a potential rules violation.

Antoine Mason had 23 points for Auburn (15-20), which shot 33 percent and had won its previous three games. Malcolm Canada added 16 points, and KT Harrell had 13.

Coming off a 15-point quarterfinal victory, Kentucky started stronger and didn't let up. More than anything, the Wildcats quickly deflated an Auburn team that upset fourth-seeded LSU 73-70 in overtime Friday.

"We wanted to have a faster start than yesterday [against]Florida, and that's what we did," guard Aaron Harrison said.

Whatever euphoria the Tigers enjoyed from the LSU game faded in a hurry against Kentucky, which drilled them by 35 points last month in Lexington, Kentucky. The challenge was all the more difficult without Granger, who sat several rows behind the Auburn bench with fans dressed in warm-ups.

Then came the pregame announcement of Bowers' suspension that made Auburn's task even tougher. The forward sat on the bench dressed in a warm-up, left with the role of playing cheerleader.

Starting in Bowers' place was 6-foot-5 junior swing man Devin Waddell, who had scored just 14 points this season. The Tigers also used 7-foot-2 reserve Trayvon Reed but still lacked the size and manpower to keep up with the taller, deeper Wildcats.

"We obviously knew we had our hands full," Auburn coach Bruce Pearl said. "For our guys, we were undersized and undermanned, but we've been that way all along. I'm just proud of the way my guys competed."

Of Bowers' situation, Pearl added, "I hope that when we complete the investigation that we're OK."

Andrew Harrison and Lyles combined for 22 first-half points, and the Wildcats led 47-29 at the break, shooting 58 percent.

Auburn drew within 55-42 on two free throws by Harrell early in the second half. But Kentucky built its lead to 27 with 10 minutes left, with Booker lobbing to Cauley-Stein for a thunderous dunk. That brought Wildcats fans to their feet again as their team returned to a familiar spot in the tournament.

Asked to explain his play, Cauley-Stein said, "[It was] just being engaged and playing with a lot of energy. It started on the defensive end and just carried over to the offensive end."

Down two players, Auburn couldn't afford to lose another. So when 7-2 Tigers center Reed and 5-9 Kentucky guard Tyler Ulis started jawing early in the first half, teammates quickly stepped in to prevent it from escalating into another confrontation. Both players were assessed technical fouls but no free throws were taken.

"I was just standing here and he came around and just kind of pushed me and I pushed him back," Ulis said. "It was just [in] the heat of the moment. ... I'm not going to go out there throwing punches because that could you get ejected."

Auburn: Waddell and Reed combined for three points and seven rebounds for the Tigers. ... Auburn posted just one first-half assist and finished with five.

Kentucky: Ulis had five of his six assists in the first half, the best of which included a drive through several players to the baseline before wrapping a pass around one to Cauley-Stein for a dunk, plus one. The 7-footer missed the free throw, but Dakari Johnson dunked the rebound for a 20-point lead. ... Kentucky was 7-of-14 from 3-point range.

Kentucky Cruises To SEC Final
Willie Cauley-Stein scored 18 points and No. 1 Kentucky improved to 33-0 on the season with a 91-67 victory over Auburn.

Cauley-Stein is ready to make history
Cauley-Stein says Wildcats had to focus on locking down on Auburn's shooting to win.

Kentucky Cruises To SEC Final
Willie Cauley-Stein scored 18 points and No. 1 Kentucky improved to 33-0 on the season with a 91-67 victory over Auburn.