No trouble for Serena in reaching quarters, where Venus waits 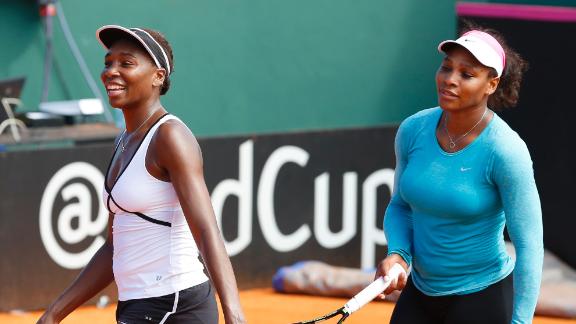 Thus Serena will have to go through Venus to get one step closer to a rare calendar-year Grand Slam. A win against her sister would leave Serena only two matches away.

"She's playing great," Serena said of Venus in her on-court interview. "I barely had time to get ready for my match because she won so fast. I have to be ready for that.

"At least a Williams will be in the semis, so that's good."

Steffi Graf was the last player, male or female, to achieve the Slam, 27 years ago. Before that, it was Margaret Smith Court (1970) and Maureen Connolly (1953).

This was Serena's 32nd consecutive Grand Slam singles match win, going back to last year's US Open, and her 25th straight in 2015.

"I don't feel any pressure," Serena said. "I wanted that Serena Slam. Winning four in a row at Wimbledon was amazing.

In 26 career meetings between the sisters, Serena holds a 15-11 record. Venus won the first encounter at the 1998 Australian Open in straight sets, while Serena took the most recent match, in the fourth round at Wimbledon, also in straight sets.

Serena has won seven of the past eight matches.

In beating the 20-year-old Keys, Serena won in a tidy 68 minutes.

This was a meeting between the player ranked No. 1 for a total of 257 weeks at the end of this fortnight and the one who has been anointed by many as her successor.

Rather, she was worried that her charge would be too amped up.

Keys played with remarkable composure until the eighth game, when she double-faulted on the final two points to give Serena the first break of the match. Serena held to win the set, coming up with a terrific, deep forehand that led Keys to dump a return in the net.

With Keys serving in the second set at 3-all, a 40-15 lead was squandered. A terrific cross-court backhand from Serena forced an awkward backhand into the net from Keys.

Serena has developed a habit of starting slowly in some of her Grand Slam matches, but on Sunday she was immediately in the match.

"It was really important," she said. "My only chance was to start out fast. I just stayed in there and did the best I could."

Serena modestly credited "a few lucky shots" as the difference.

Keys, meanwhile, completed her best Grand Slam season. She lost to Serena in the semifinals of the Australian Open and reached the third round at Roland Garros and the quarterfinals at Wimbledon -- all career bests, along with her fourth-round finish at Flushing Meadows.

In her on-court interview, Venus was asked about her rivalry with Serena.

"It's been awesome," Venus said. "I'm so proud of Serena, and I think she's proud of me. We inspire each other."

For Kontaveit, ranked No. 152, it was the seventh match in 10 days and her first appearance in the fourth round of a major.

Venus, the oldest player left in the women's draw at 35, is into the second week of the tournament for the first time in five years. Kontaveit, 19, wasn't born when Venus turned pro in 1994. Venus defeated 18-year-old Belinda Bencic in the third round.

This year, despite still not being able to practice for long periods of time, she is 8-3 in three-set matches -- including the first and second rounds of the US Open.

In the late night session match, 40th-ranked Frenchwoman Kristina Mladenovic advanced to her first Grand Slam quarterfinal with a 7-6 (2), 4-6, 6-1 win over Ekaterina Makarova.

The 13th-seeded Makarova made the semifinals at Flushing Meadows a year ago, but Mladenovic, 22, was the more poised player in this one, twice rallying from down a break in the first set. She won with style too, pulling off a between-the-legs shot on the way to taking a point during the second set.

In their previous two meetings, Mladenovic won the first set only for Makarova to beat her in three. There was no repeat this time, with Mladenovic bursting to a 4-0 lead in the final set.

Mladenovic next faces 43rd-ranked Roberta Vinci, who advanced without playing a point when 25th-seeded Eugene Bouchard withdrew from their fourth-round match Sunday after sustaining a concussion when she slipped and fell in the locker room Friday.

Serena on Venus: I'm playing the best player in the tournament
Serena and Venus Williams describe how they will approach playing each other in the quarterfinals of the US Open.

Serena cruises, showdown with Venus next
Serena Williams defeats Madison Keys in straight sets to advance to the quarterfinals, where she will face her sister Venus.

Serena says her serve was back to form
Serena Williams told ESPN's Mary Joe Fernandez that it was "now or never" for her serve to improve against Madison Keys in her 6-3, 6-3 victory. Williams also discussed playing her sister Venus Williams next in the quarterfinals of the US Open.
Related topics:
sportsespnwtaus openwilliams sistersvenus williamsnews uk tennistennisespnwserena williams
Copyright © 2021 ESPN Internet Ventures. All rights reserved.
More Videos
From CNN Newsource affiliates
TOP STORIES