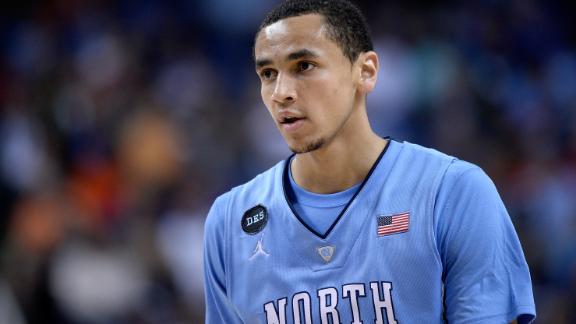 North Carolinasenior guard Marcus Paige, who dealt with multiple injuries for much of last season, will miss the next three to four weeks after suffering a fracture in his non-shooting hand earlier in the week.

The school said in a statement that the injury occurred during practice Tuesday.

Paige is a preseason All-America candidate and considered arguably the best player on a Tar Heels team that will enter the season ranked first in the country by The Associated Press.

"I hate it for Marcus," UNC coach Roy Williams said in a statement. "He's such a wonderful young man -- one of the most outstanding people I have been lucky to coach. I know he'll handle this with the same level of maturity and responsibility that he does everything else.

"Our team will certainly be challenged in his absence. We will need everyone up and down the roster to step up their games and take care of each other and our team until he gets back."

Paige dealt with multiple leg injuries as a junior, but he still managed to average 14.5 points, 4.5 assists while shooting 40 percent from beyond the arc. Paige averaged 17 points in four ACC tournament games.

North Carolina opens the regular season against Temple on Nov. 13 in the Veterans Day Classic.

Paige has only missed one game in his career thus far. While the Tar Heels are deep up front, they aren't quite as deep in the backcourt. Coach Roy Williams could elect to play veteran Nate Britt and Joel Berry II together, or could move athletic wing Theo Pinson -- who missed much of the summer while recovering from foot surgery -- into the starting lineup.