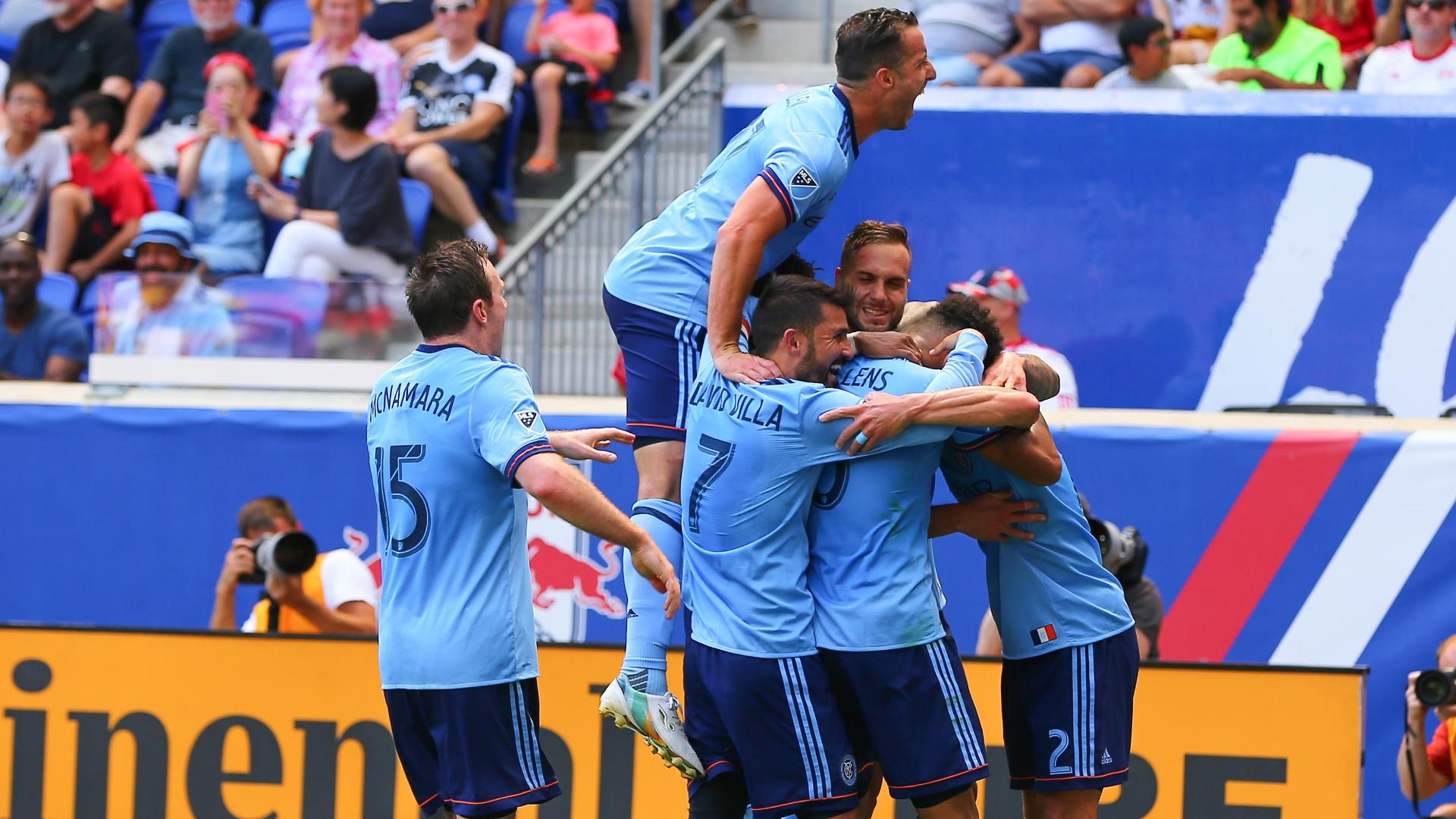 The win was only NYCFC's second over its local rivals and first at Red Bull Arena in the club's three seasons.

Harrison scored his seventh goal of the season to give NYCFC the lead in the 34th minute.Rodney Wallace held the ball on the edge of the box before passing to the overlapping Sweat, who fed the former No. 1 pick to put a shot in under the bar.

Sweat added his first career MLS goal midway through the second half to seal the victory. Alexander Ring sent a long free kick deep into the box and Sweat sent a looping header inside the far post.

NYCFC controlled most of the game, and the hosts only managed to put one shot on target.

The Red Bulls' Alex Muyl was booked for simulation after stumbling in the box in the 77th minute, prompting fans to throw objects on the pitch.

Picault lined up under a cross from Alejandro Bedoya and volleyed a shot inside the near post to provide the only goal in the 32nd minute.

D.C. had a chance to equalise when Union defender Oguchi Onyewu was whistled for handling a deflected shot, but Blake dived to his right to stop Lamar Neagle's penalty.

And Blake came up huge to deny Neagle again in stoppage time to preserve the victory.

In a bizarre moment in the second half, D.C. United's Luciano Acosta was shown a red card after getting tangled with Haris Medunjanin, but the referee then rescinded it after conferring with the Union player.

Josef Martinez scored the only goal as Atlanta United beat the Colorado Rapids 1-0 in front of 44,938 fans at Bobby Dodd Stadium.

Moments after Martinez had a bicycle-kick attempt knocked down in a fine save from Rapids goalkeeper Tim Howard, Martinez found the breakthrough in the 67th minute.

Martinez made his first start since returning from a thigh injuryafter coming off the bench in three games.

Brandon Vazquez cut the ball back for the composed Martinez in the center of the box, and theVenezuelan took his time to pick his spot and score his seventh goal of the season.

Federico Higuain scored twice and substitute Kekuta Manneh added a goal and an assist as Columbus Crew SC ran over the Montreal Impact 4-1.

Higuain delivered the opener in the 17th minute when his free kick took a deflection in the Impact wall before finding the net, but the visitors were able to equalise two minutes later through Anthony Jackson-Hamel after a Higuain giveaway.

It stayed level until the 70th minute when Kekuta Manneh scored seconds after coming on for Columbus after Montreal failed to clear a loose ball out of the box.

Two minutes later, Manneh crossed for Ola Kamara to add a third goal with a volley from six yards out, before Higuain capped the win with his second goal in the 88th minute.

Accam scored twice in the opening eight minutes, the first coming in the third from a cross from Matt Polster. In the eighth, he got behind the defense after a long pass from Bastian Schweinsteiger and easily scored.

Accam picked up an assist in the 52nd minute with a short pass between two defenders to league scoring leader Nemanja Nikolic, who put the ball in from the right side for his 14th goal.

Playing his third MLS season, Accam completed the hat trick with his 10th goal of the season on a penalty kick in the 63rd after he was taken down in the box by Scott Sutter.

Chicago extended its unbeaten streak to nine and is undefeated in 12 home matches, including a team-record seven in a row this year. Orlando, which did not have a shot on target, is 1-5-2 on the road.

The Fire's only previous competitive win against Orlando came in the 2015 U.S. Open Cup.

Francisco Calvo and Jerome Thiesson scored second-half goals and Minnesota United rallied for a 2-2 draw at home with the Vancouver Whitecaps.

An unmarked Calvo headed a long cross from Kevin Molino into the turf and just inside the back post for his first career goal to get United back into the game five minutes into the second half.

Thiesson tied it with his first MLS goal. Taking a centering pass from Miguel Ibarra, Thiesson, a veteran of the Swiss Super League, sent a hard, curving roller from 20 yards out through the defenders and past a diving David Ousted into the left side of the net in the 63rd minute.

Cristian Techera converted a penalty kick in the 17th minute, and Ton Tchani scored in first-half stoppage time for Vancouver.

After a mis-played backpass, Minnesota keeper Bobby Shuttleworth took out Brek Shea in the box, leading to Techera's penalty kick.

Tchani's first goal with the Whitecaps was a diving header from a free kick by Techera.

TheLA Galaxy'shome woes continued as they came out on the losing end of a 2-1 result against Western Conference leadersSporting Kansas City.

GoalkeeperClément Diop had a rough night for the hosts -- who have won just once at home this season -- beginning when he misjudged a punch onRoger Espinoza's shot from distance and allowed it to glance off his gloves and into the back of the net to give SKC an early 1-0 lead.

Ike Opara doubled the visitors' advantage before the break, getting on the end of a high ball that bounced into the LA penalty area where he pivoted and scored with a beautiful first-time overhead kick.

Trailing 2-0 in the second half, the Galaxy came out and pushed frantically for a first goal. Romain Alessandrini blazed well over the bar with a free kick in the 50th minute and nearly scored minutes later from 20 yards away with a well-hit line drive.

And LA's goal finally came in the 77th minute from a corner kick, as Jose Villarreal's powerful header forced a save from Tim Melia, with the rebound falling to David Romney, whose headed shot just crept over the goal line to make it 2-1.

The Galaxy's equalizer never came as SKC held off a sustained late second-half effort from Curt Onalfo's team to hold on for all three points on the road and hit the 30-point mark in the standings.

Danny Hoesen scored his second goal of the season and assisted on Marco Urena's second goal, lifting the San Jose Earthquakes to a 2-1 victory over Real Salt Lake.

Hoesen opened the scoring in the 13th minute, off a long cross from Nick Lima. After touching the ball down, Hoesen gathered it off a defender's foot, stepped inside and unleashed a left footer into the top corner from just off the penalty spot.

Hoesen's long through ball down the right side sent Urena free and from a tight angle he rolled the ball past Nick Rimando in the 68th minute.

San Jose, which has battled injuries and call-ups to score just 16 goals in 16 games, won for just the second time in its last seven games.

Lima picked up two yellow cards in the second half and the Quakes played a man down from the 71st minute.

David Bingham made only one save in each half but was denied his seventh shutout when Jose Hernandez scored his second goal in the fourth minute of stoppage time for Salt Lake. 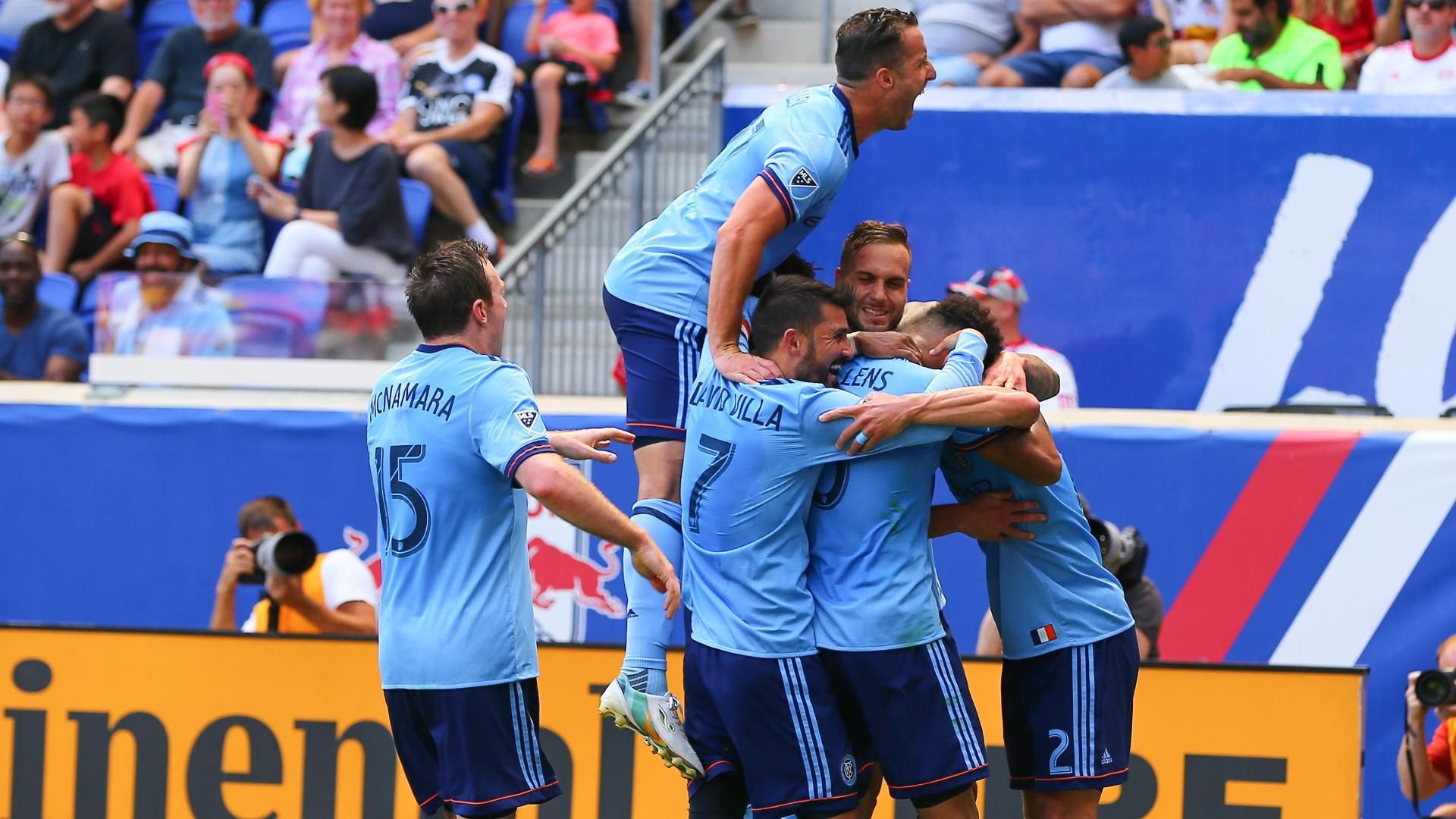 Union 1-0 D.C. United: Philly scrape by
A feisty match between Eastern Conference rivals ended with Fafa Picault's lone goal as the difference on the night.

Atlanta 1-0 Colorado: United break through
After a plethora of chances for Atlanta United, Josef Martinez finally provided the hosts a goal and a win over Colorado.

Chicago 4-0 Orlando: Accam dominates
David Accam pulled all the strings for Chicago Fire, scoring three goals and adding an assist in a rout of Orlando City.

Minnesota 2-2 Vancouver: Loons reverse fortunes
Down 2-0, and having few chances, Minnesota were able to pull level with Vancouver with some gritty team play.

LA Galaxy 1-2 Sporting KC: Mishaps and magic
An error from Clement Diop and a wondergoal from Ike Opara propelled Sporting Kansas City to a big win at LA Galaxy.