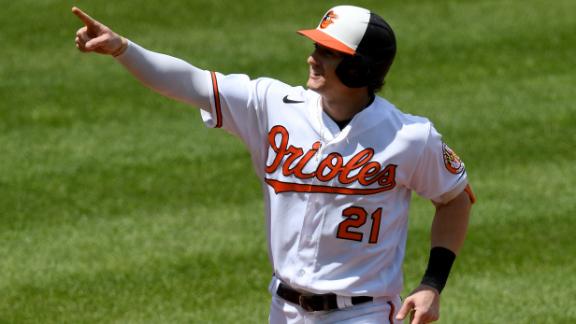 BALTIMORE -- - Rather than getting giddy, Oakland Athletics manager Bob Melvin says his team has become "greedy."


The A's, who opened the season with six straight losses, put together their third-longest winning string since moving to Oakland in 1968.

"You do want to win the series but you also want to get greedy," Melvin said. "We've been greedy here recently. It's about winning every game that you go out there and play."

"At the end of the day, if you leave and you win a series, it's a good thing. But we wanted to win bad today. We just didn't do enough offensively to give ourselves a chance," he said.

Oakland won 14 in a row in 1988 and a then-American League record of 20 consecutive wins in 2002. Cleveland broke that mark with 22 straight in 2017 - the Athletics' string had been the longest in the majors since that run by the Indians.

Means (2-0) had additional two days of rest heading into this start because manager Brandon Hyde wants to keep his pitchers fresh. The left-hander allowed just one run on two hits with six strikeouts over 6 1/3 innings, lowering his ERA to 1.50 - best among AL starters.

Hays hit his first two homers of the season. Cedric Mullins had three hits, raising his average to .350 for Baltimore.

The Orioles broke open the game with five runs in the eighth that began with a solo home run by Maikel Franco and a bases-loaded walk by A's reliever Deolis Guerra to Ryan McKenna, who earned his first major league RBI. A bases-loaded error by shortstop Elvis Andrus gave the Orioles their sixth run before Trey Mancini delivered a two-run single.


"We're definitely a confident group and knew that if we kept playing our game and kept working to get better, things we're going to turn around," A's third baseman Matt Chapman said.

"We started putting together good at-bats. Once we get hot, we get rolling, I don't know if we could have predicted we were going to win 13 in a row like that, but who would have thought we would have lost six in a row to start the season, It all evened itself out and we're right where we need to be to make a run at this thing," he said.

But he was outdueled by Means, who kept the A's off-balance for most of the day with his four-seam fastball, slider and changeup.

"I think this was a pretty solid outing," Luzardo said. "Obviously, we didn't get the win. It wasn't what we wanted. Hays got me twice. I am not happy that we lost. I feel like taking back a pitch or two, but other than that, I feel really good."

Hays gave the Orioles the lead with a solo shot to center in the second. Ramón Laureano tied it at 1 in the fourth when he homered into Baltimore's bullpen.

Hays answered in the bottom half with an opposite-field, two-run homer that gave Baltimore a 3-1 lead. It was the second multihomer game of the 25-year-old's career.

"You hope that something like this kick-start the offense and really gets us going," Hays said. "Hopefully, we can carry what we did today into tomorrow against the Yankees."

Orioles: LHP Zac Lowther was recalled from the alternate training site at Double-A Bowie. Lowther made his major league debut in the ninth and allowed a leadoff single before retiring the side. In a corresponding move, LHP Wade LeBlanc was designated for assignment. LeBlanc took the loss Saturday night after allowing four runs and six hits over 1 2/3 innings.

Athletics: Melvin said he will give several players a break during the upcoming three-game series with the Tampa Bay Rays, especially with the potential impact of playing on the turf at Tropicana Field.

Athletics: LHP Sean Manaea (2-1, 3.04 ERA) will pitch the opener in Tampa Bay on Monday night. He threw seven scoreless innings with seven strikeouts in a 2-1 victory over the Twins in his last outing.

Orioles: RHP Matt Harvey (1-1, 5.12 ERA) starts the series opener on Monday night at home against the Yankees. Harvey picked up his first win since July 13, 2019, against the Marlins on Tuesday.