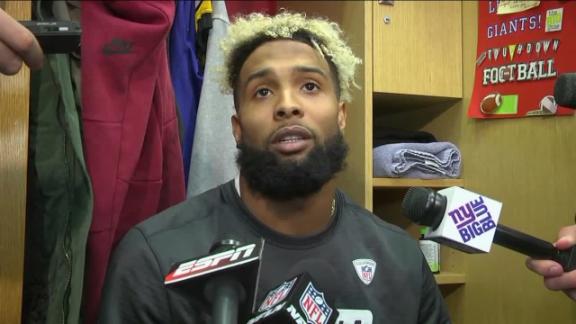 ESPN
By Jordan Raanan
EAST RUTHERFORD, N.J. -- New York Giants wide receiver Odell Beckham Jr. would like to take back his comments after Sunday's 24-14 loss to the Pittsburgh Steelers, even if he still believes "Stevie Wonder can see it" when referencing the officials' questionable decisions throughout the contest.

Beckham was upset about several calls and non-calls -- especially a questionable first-quarter offensive pass interference -- and being told by one official to "get out of my face" when he asked for an explanation. He even suggested that referee Terry McAulay's crew shouldn't be allowed to work another Giants game given their past history.

Three days later, as Beckham and the Giants were in the midst of preparing for a Sunday night matchup with the Dallas Cowboys, he was feeling some regret for his comments.

"It's not really any point of talking about it. Nothing is going to change," Beckham said on Wednesday. "You're sitting there wasting breath."

Coach Ben McAdoo agreed with Beckham that there were some questionable calls in the game. McAdoo said he was going to utilize the league's process where teams can send plays in for clarification purposes. That process would get "plenty of use" this week, according to McAdoo.

The Giants' coach clearly had his star player's back.

"It doesn't surprise me," Beckham said. "Like I said, everybody knows what is going on on the field. Everybody can see it. Stevie Wonder can see it. It is what it is. You can't do anything about it. There is no point."

After the loss to the Steelers, the Giants (8-4) are going to need some wins down the stretch against difficult competition to qualify for the playoffs.

Beckham doesn't see any benefit harping on the past at this point. His full attention is on the Cowboys and helping the struggling Giants get back on track.

"I don't even know why ... I shouldn't have even brought it up because it's always a lose-lose situation bringing something up," he said. "Either you're speaking out on it or now you're trying to defend yourself. Or the other way around, you're complaining."

"Either way it goes, I should've never brought it up. It's irrelevant. Nothing is going to change. No calls are going to be made because of what I say now. You just have to keep playing.