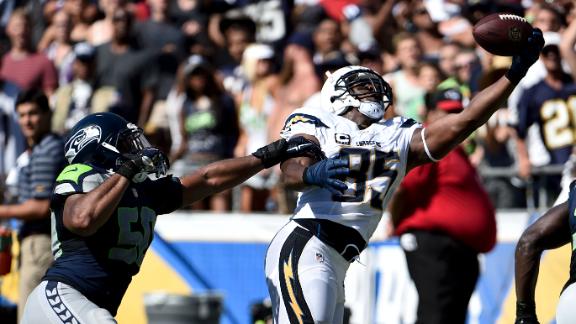 The NFL says league officials erred by not stopping play for a replay review after the Seattle Seahawks' Percy Harvin scored on a 51-yard touchdown run against San Diego.

The first-quarter play put Seattle ahead 7-3, its only lead of the day. The Chargers won 30-21.

Harvin took a pitch from Russell Wilson, got the edge and ran down the left sideline. But Harvin had stepped on the sideline during the run and the NFL said after the game the score was "incorrectly confirmed.''

"Had the game been stopped for a replay review, the touchdown would have been reversed because Harvin stepped out of bounds at the San Diego 21-yard line,'' the league said.

Every scoring play is reviewed by the replay officials, but the crowd at Qualcomm Stadium was stunned when they saw the replay and the TD was not reversed.

The 51-yard score was the longest of Harvin's career on a running play from the line of scrimmage.

ESPN.com Seahawks reporter Terry Blount and The Associated Press contributed to this report.