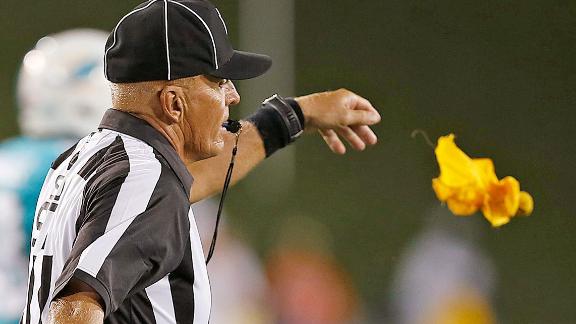 NFL games this season are averaging about 17 penalties, up more than two per game from the 14.7 at this point in 2013, according to the league, and the man in charge of officiating is OK with the trends.

Some flags are negating highlight-worthy action -- 15 touchdowns have been wiped out already, up from 11 at this time a year ago, according to STATS -- and might just be changing the nature of the way defense is played.

"I'm certainly not surprised that fouls are up. ... We're in a good place," NFL vice president of officiating Dean Blandino said in a telephone interview Thursday with the Associated Press.

"I don't see a diminished product on the field," he said.

Games are actually running a few minutes shorter this season, despite the increase in penalties.

Where things are especially out of whack is in the defensive-backfield rules that the competition committee decided to emphasize -- and in the case of illegal contact, reword.

There already have been more illegal contact calls than the 54 for all of last season.

Blandino's message: Don't expect things to go back to the way they were.

"If we pull back now, then we aren't being consistent, and I think that's important," he said.

"We were very liberal in these areas, and teams then started to play and coach to those standards, so they've been underofficiated," Blandino said. "And that was the reason the committee felt it was time to tighten it up."

Clearly, not everyone has figured out how to adjust.

"You kind of had a dog that went to the bathroom in one place for 10 years," Cincinnati Bengals defensive coordinator Paul Guenther said, "and now he has to go over here."

Some defensive players wonder aloud whether the NFL only wants to make things easier for quarterbacks and wideouts who already were able to gain yards and points seemingly at will. So far, QBs have been more successful than ever: The NFL-wide completion percentage of 63.7 and interception rate of 2.4 are both the best through five weeks since at least 1950, according to STATS.

As for what happened Monday night, when Seahawks safety Earl Thomas surmised that the 13 penalties on the Super Bowl champions was an attempt to keep things close against the last-place Redskins, Blandino called it a coincidence that three flags wiped out Harvin's scores.

"As long as there have been officials," Blandino said, "there's players that complained about calls."