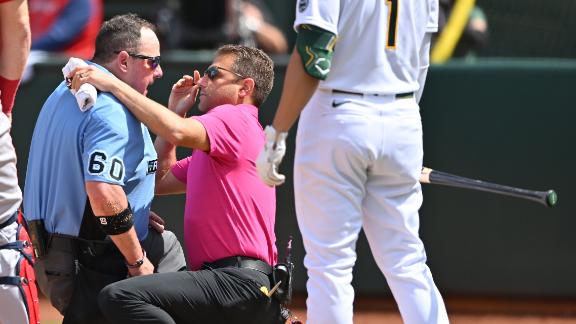 OAKLAND, Calif. -- - Shohei Ohtani homered for the second consecutive game, leading the Los Angeles Angels to a 5-1 victory over the Oakland Athletics on Sunday.

A day after becoming the third Japanese-born player to reach 100 homers in the major leagues, Ohtani belted No. 101. His eighth homer this season was a 425-foot drive deep into the right-field stands off a first-inning sinker from Frankie Montas. Mike Trout, who singled ahead of Ohtani, scored.


"That had some great hang time to it," Angels manager Joe Maddon said. "Not many people hit Montas but I don't know, that was 97 mph elevated and he got all of it. When he's starting to get to that, heads up."

Patrick Sandoval pitched into the sixth inning and got back on track after a pair of rocky outings to help the Angels (24-13) move 11 games above .500 for the first time since July 28, 2015.

Sandoval (2-1) allowed one run and four hits, lowering his ERA to 1.91. The left-hander overcame a season-high four walks and pitched out of jams in the first three innings when the A's stranded four runners in scoring position.

Sandoval has allowed three runs or fewer in all six of his starts this season.

"I didn't have the changeup. I had to find something that worked and slider was the pitch," Sandoval said. "I don't want to get in those jams in the first place but when you're in them you have to get out of them and I think I did a pretty good job today of doing that."

Jimmy Herget retired eight batters to complete the five-hitter and earn his first career save.

"Coming up in the minors I closed all the way until Triple-A," Herget said. "It was always a goal of mine to get a save in the big leagues. I got it the hard way but I got it."

When Ohtani was intentionally walked in the third two batters after Ward's leadoff triple, the crowd at the Coliseum - many of them wearing Ohtani jerseys and other Angels gear - booed loudly.


The A's went 0-for-11 with runners in scoring position and scored their only run in the third on Sean Murphy's grounder.

Montas (2-4) was sharp after the first. He had a season-high 12 strikeouts in six innings and allowed four hits and two runs but remained winless since April 18.

"Jimmy Herget channeling his inner Rollie Fingers today in this ballpark." - Maddon after the right-hander threw 44 pitches and closed the game with the longest relief stint of his career.

ROUGH DAY BEHIND THE DISH

Plate umpire Marty Foster left the game after getting hit in the facemask a second time. Foster was hit in the sixth inning by a foul ball from Kevin Smith and collapsed to the ground before being helped to his feet by A's assistant athletic trainer Brian Schulman.

Foster remained in the game, but in the top of the seventh Oakland reliever Zach Jackson threw a low pitch that bounced up and hit Foster again. Second base umpire Scott Barry replaced Foster behind the plate.


The A's were credited with three sacrifice bunts, an example of first-year Oakland manager Mark Kotsay's small-ball philosophy. It's the first time the A's have done that in one game since 2013.

Angels: IF Luis Rengifo (elbow contusion) was held out after being hit by a pitch in the second game of Saturday's doubleheader.

Athletics: 2B Tony Kemp stayed in the game after getting hit in the ribs by a pitch from Sandoval leading off the first. ... 3B Sheldon Neuse was rested for the first time this season. Neuse had started the previous 33 games.

Athletics: LHP Kyle Logue (1-1, 1.35) faces the Twins for the second time in two weeks in the opener of a three-game series Monday. Logue has allowed two earned runs in 12 innings since being recalled from the minors on May 6.