The Pac- 12 presidents and chancellors on Thursday voted to play a seven-game conference football schedule beginning on Nov. 6, and culminating with a conference championship game on Dec. 18 -- just in time to be included in the College Football Playoff discussion. With the Pac-12's decision, every Power 5 conference has now committed to playing this fall, and all of them will end their seasons before CFP Selection Day on Dec. 20, when the 13-member selection committee chooses the top four teams in the country.

While the ACC and Big 12 have already started, the SEC kicks off its season this weekend, and the Big Ten has announced it will start Oct. 24.


Kyle Bonagura, Heather Dinich and Adam Rittenberg break down what it all means.

What is the Pac-12's schedule to return to play?

Pac-12 teams can transition to 20 hours per week of countable athletic activities, although not every team is in the same stage of preseason preparation. Commissioner Larry Scott said some programs still need to clear state and/or local regulations to begin full practices with large groups congregating and ultimately with contact. Daily antigen testing from Quidel Corporation is coming soon, although those conducting the testing still must receive formal training and clearance before the process can fully operate, said Dr. Doug Aukerman, Oregon State senior associate athletic director for sports medicine and the chair of the Pac-12's student-athlete health and well-being initiative.

Some Pac-12 teams have not been together since the Aug. 11 postponement of the fall season, or have been very limited in recent weeks. Although the league considered allowing some teams to begin competition Oct. 31, it wanted each team to go through six weeks of preparation, as recommended by the NCAA football oversight committee, and it wanted to eliminate any competitive advantages for those starting sooner.

The Pac-12 is expected to release a revised football schedule next week, Scott said.

What were the biggest factors in getting back on the field?

There were two key factors in the Pac-12's return to play. The first: pressure. Had the rest of the Power 5 conferences postponed their fall seasons, like the Pac-12 and Big Ten did initially, the Pac-12 would not have even considered reversing its decision. However, once it looked as though the Pac-12 might be the only Power 5 conference not to play in the fall, it turned into a potential public relations nightmare. In terms of its place in the national conversation, the Pac-12 has been trending down for years. Not playing would have taken that to a new low.

USC athletic director Mike Bohn said the Big Ten's decision last week to relaunch its fall schedule affected Trojans football players, who soon wrote to California Gov. Gavin Newsom outlining why restrictions should be lifted so they could play a season. "They recognized they were an outlier," Bohn said.

The second big reason is rapid testing. With a deal to provide rapid-turnaround daily testing for COVID-19 in early October, the conference mitigated serious concerns from its medical advisory group. The conference didn't believe it would have that capability this fall, and when that changed early last month, a return became more feasible.

"We didn't have that the first time we voted," said Oregon president Michael Schill, chair of the Pac-12 CEO group. "That made us much more comfortable."

Schill said money had no role in the decision to relaunch the fall season, noting that the large deficits projected for Pac-12 athletic departments largely will remain. "The amount of money [generated in] going back to playing is tiny in comparison to the losses," Schill said.

Are fans allowed at the games?

No fans will be allowed at any games on Pac-12 campuses, but conference officials will revisit the decision in January.

What are the biggest remaining hurdles?

The coronavirus pandemic is about to collide with the flu season. While every school and conference that is attempting to play this fall has gone to great lengths to establish its testing and contact-tracing protocols, the first few weeks of the season have already proved that disruptions are inevitable and will continue.

Houston has seen four consecutive opponents postpone because of the coronavirus. Virginia Tech still hasn't played a game. In the Pac-12, Colorado is unable to practice for two weeks because the County of Boulder on Thursday -- just hours before the presidents met -- issued a prohibition on gatherings among university students between 18 and 22 years old. Pac-12 officials will continue to monitor state and local guidelines and not hesitate to pause or cancel the season if virus conditions worsen. Schill said a "series of metrics" -- positivity rate, total number of cases the ability to effectively contact-trace and the rate of community spread -- will determine if the season can proceed or whether the league must "pull the plug or pause for a while."

"We're moving forward now, but we're not moving forward with our eyes shut," Schill said. "If we get spikes that are not sustainable, we will stop playing."

The Pac-12 has had unique challenges because of its state and local restrictions, especially in California and Oregon, which Schill said pushed the league to a later time frame. "Once those barriers came down," he said, the Pac-12 CEOs could seriously consider competition.

"We've received comfort and clarifications that are very, very helpful, in terms of the confidence to move forward," Scott said, "but there's still some exact details to work out on a school-by-school basis, which will be done locally."

How will the regular-season schedule be structured?

All 12 teams will play seven games, with six coming before the Pac-12 title game on Dec. 18. Everyone will play the five teams in their division, plus a crossover divisional game, and all six will count toward the standings. Scott said there was discussion about not including the crossover game toward the standings -- as a way to preserve some competitive equity -- but ultimately they decided it was important for every game to matter. Once the title game is set, the remaining 10 teams will play an additional game against a team from the opposite division the same weekend.

What does this schedule mean for the College Football Playoff?

Don't rule out the Pac-12, even with a seven-game schedule that starts on Nov. 6. The CFP management committee, which is comprised of the 10 FBS commissioners and Notre Dame athletic director Jack Swarbrick, has not set any cutoff dates for starting a season, or determined a minimum number of games that have to be played to qualify for a semifinal. That doesn't mean the committee won't -- but it doesn't have to right now.

Since the commissioners determine the playoff protocol -- and they also are working in the best interests of their respective conferences -- it would make sense to wait longer to see how many disruptions there are through at least mid-November before setting definitive benchmarks.

If Oregon were to finish the season 7-0, and another CFP contender saw its season disrupted because of the virus, the Ducks could be considered for a top-four spot. What if Alabama plays only seven games and loses one to finish 6-1?

"Our schools, knowing we're going to be able to play a meaningful number of games, high-level games, with our championship concluding before that final CFP meeting, we absolutely have the opportunity to have a team in the mix for the playoff," Scott said, "and I know our teams and our student-athletes are coming back, eager to compete for that."

What happens with other fall sports?

Traditional fall sports such as volleyball and soccer will continue preparing for a spring season, to remain in line with the adjusted NCAA championships structure.

Pac-12 men's and women's basketball teams can begin competition on the NCAA standard start date of Nov. 25, and can begin practicing along the same timelines barring issues with local or state regulations. Although the Pac-12 plans to increase its conference schedule from 18 to 20 games, Scott said it might make sense to keep the 18-game structure for this season. Scott, who spoke with the basketball coaches Thursday night, said discussions will continue around multiteam events, conference games in December and how to structure nonleague schedules. He said any nonleague opponent must uphold the same COVID-19 testing standards as Pac-12 teams.

"There is still a lot of open-ended questions about the role of nonconference games," Scott said. 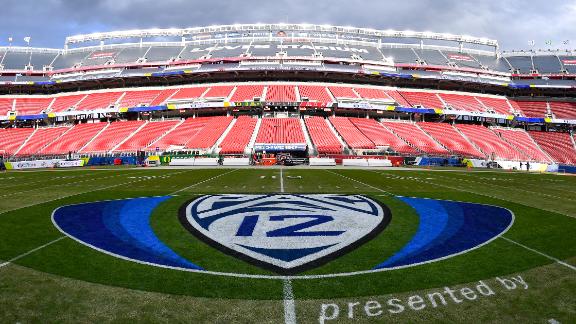