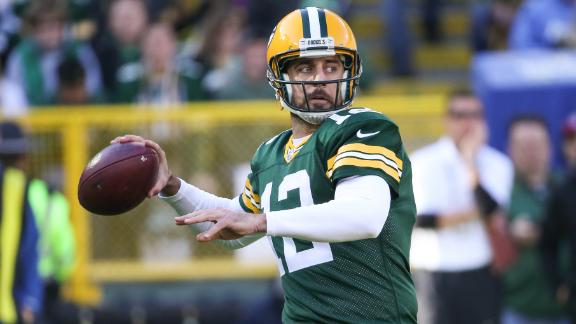 GREEN BAY, Wis. -- For the first time this season, the Green Bay Packers have admitted that Aaron Rodgers is hurt -- not enough to completely keep him out of Wednesday's practice and almost certainly not enough to prevent him from playing on Sunday at Minnesota-- but at least enough to warrant a spot on the injury report.

Most concerning is that it's his throwing shoulder that landed him on the injury report.

Coach Mike McCarthy described Rodgers as "banged up" on Wednesday, a term Rodgers said was accurate.

"But we all are at this time," Rodgers said. "It's Week 11 coming up, everybody is dealing with different things. That's the NFL. You get a routine, learn how to take care of your body and push through things."

When asked whether he had any concern about his availability against the Vikings, Rodgers simply said: "No."

McCarthy on Thursday echoed the assessment of his quarterback, saying he has "no concern" about Rodgers' availability for Sunday's game.

However, when asked how much Rodgers will be able to do in practice Thursday, McCarthy said: "Ah, I don't know. We'll see. Like I said yesterday, he's banged up. We'll see what he does. He looks good so far."

It's not a surprise that Rodgers landed on the injury report. However, that it was his right shoulder was unexpected because Rodgers took a shot to his left knee late in Sunday's loss to the Detroit Lions from defensive end Ezekiel Ansah and came up limping slightly.

Rodgers has been sacked 11 times in the past three games -- the same sack total he had in the first six games combined -- prompting McCarthy to say that his quarterback has gotten hit "way too much."

Officially, Rodgers was listed as a limited participant in Wednesday's practice and was seen only making some short throws during the portion that was open to reporters.

It's the first time Rodgers has acknowledged an injury since the strained calf muscle that limited him over the final month of 2014. He was one of 14 players listed on the Packers' injury report this week.