Panthers' Cam Newton on penalty: 'I've got to be better than that' 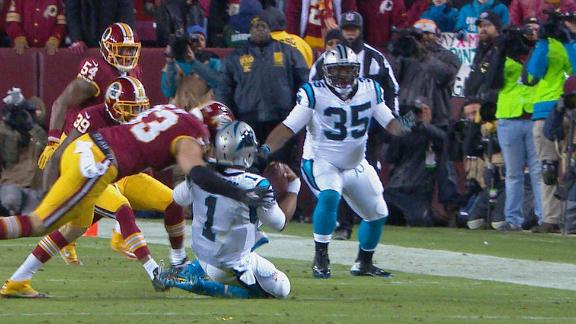 LANDOVER, Md. -- Cam Newton was not happy a helmet-to-helmet penalty wasn't called when aWashington Redskinsdefender hit him, but the Carolina Panthers quarterback said he regrets his reaction after the play, which drew an unsportsmanlike conduct penalty.

Newton was scrambling on his way out of bounds in the first half of the Panthers' eventual 26-15 victory over the Redskins on Monday night, when he was hit by Washington's Trent Murphy. Newton shot up and tossed the ball at Murphy as the quarterback walked away to draw the penalty.

"I've got to be better than that," Newton said. "That just can't happen on my part. I just have to let the referees do their job, and obviously, it was a questionable hit, but I can't throw the ball at a person. That's against the rules too."

Panthers coach Ron Rivera offered his thoughts on the play.

"On the sideline, yes. I took a look at the video board. And that's it," Rivera said. "I get to see it, and unfortunately, they're trying to make a decision at full speed. But at the end of the day, we've got to keep our composure.'"

Rivera argued it should have been offsetting penalties, which would have left the Panthers in field goal position. Because Newton was sliding, he was rendered defenseless. Instead, Carolina had to punt.

Gerry Austin, a retired official who works on ESPN broadcasts, agreed with Rivera's take on the play.

"That was a sliding quarterback and you have helmet-to-helmet contact. You should have had a call there," Austin said.

Referee Walt Coleman defended the call after the game.

"Well, what I saw was that Cam slid late, and the defender went over the top," Coleman said. "I didn't see any forcible contact with the head.

"OK, if they slide late, they can be contacted, but they still can't be contacted forcibly in the head. And so what we ruled was that he slid late but there was no forcible contact with the head -- that he just went over the top."

This was the latest incident in a season of frustration for Rivera and Newton over uncalled penalties on illegal hits and helmet-to-helmet shots against the reigning NFL MVP.

The first occurred in the opener against theBroncosin Denver, where Newton was hit in the helmet twice without penalties being enforced.

It escalated when Newton blasted officials after a home win against theArizona Cardinalsfor not calling a hit below the knees while he was in the pocket.

"It's really taking the fun out of the game for me -- honestly, it really is," Newton said at the time. "At times, I don't even feel safe. Enough is enough. I plan on talking to commissioner [Roger] Goodell about this. It's not fun, and I don't know what I have to do."

The officiating crew that day also was headed by Coleman.

Newton and Rivera had a conversation with Goodell after the Arizona hit. Newton said his point was made, and the league later admitted it should have been called a penalty.

Coleman said his crew doesn't work a game any differently knowing that Newton spoke with Goodell to voice his concerns.

"We just work the game, and if it's a foul, we call a foul," Coleman said. "If it's not, then we don't. So you know, it doesn't make any difference to us who is playing or who the quarterback is. We're trying to get the plays correct."

A few weeks after the Arizona hit, Newton drew his first roughing the passer penalty since Week 15 of the 2014 season in a loss to theRaidersin Oakland.

Monday's unsportsmanlike conduct penalty on Newton was his second this season, making him the only quarterback to have two this season. His other came in Week 4 at Atlanta.

"I'm not going to beat a dead horse. I just can't retaliate in that way; I'm better than that, I know I am," Newton said following the game against the Redskins. "I can't jeopardize that type of play for my team."