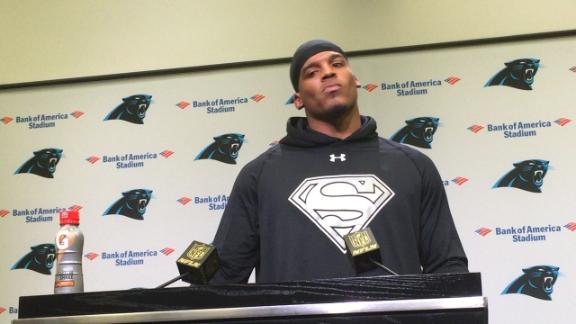 CHARLOTTE, N.C. -- Carolina Panthers quarterback Cam Newton says his new son already has a couple of scholarship offers and has taken his first jog, but he hasn't dabbed.

"He hasn't got the style yet," Newton said on Thursday, his first public comments about the birth of his son a week ago on Christmas Eve. "I'm pretty sure he's not too far from it."

Newton, who became synonymous with the "dab" dance move after a touchdown celebration at Tennessee on Oct. 15, announced Wednesday night on Twitter that he and longtime girlfriend, Kia, were "blessed to have a son."

Newton said he would reveal the name of his son in "due time," but the Charlotte Observer reported that the child is named Chosen Sebastian Newton. The baby weighed 9 pounds, 6 ounces and was 20 inches long.

"He can dunk too," Newton said with a laugh.

Carolina coach Ron Rivera said it's obvious Newton is "pretty proud" to be a father.

That was evident during Sunday's 20-13 loss to Atlanta, Carolina's first of the season after a 14-0 start, when Newton did the "rock the baby" move after scoring on an 8-yard run.

It was evident again as Newton spoke Thursday.

"It was pretty cool, pretty cool," Newton said of becoming a father. "All fathers can speak on -- when you see life come into existence, it's a wonderful thing. These past couple of days have been so monumental for me.

"I took him out for a jog yesterday. He was running alongside me ... No, I'm serious. He has a couple of scholarship offers already on the table. I'm not pushing him to be anything. He's just a 'Super' already."

Newton, wearing a "Superman" sweatshirt, joked that reporters were overdoing it on his becoming a father with a steady stream of questions.

But he made it clear that had nothing to do with Carolina scoring a season-low 13 points in the loss to Atlanta.

"Yeah, I had a child," Newton said. "The people that needed to know have known for a while. Nothing's pretty much changed beside our record. The focus is still the same, to find ways to become 1-0.

"We had a lot of distractions last week. The main one was the practice schedule more than anything. That's probably been the [least] amount of practice since I've gotten here."

Between Christmas Day off and heavy rains, the Panthers got in only one full practice outside. They were forced to practice in the Charlotte Convention Center on Wednesday.

Newton, who missed the last two segments of Thursday's practice to attend the birth of his son, said he wasn't making excuses for the loss. He just wants to make sure that doesn't happen again as Carolina (14-1) prepares for Sunday's regular-season finale against Tampa Baywith home-field advantage throughout the NFC playoffs at stake.

"It shows," Newton said of Carolina's lack of practice last week. "You see the film. You see a lethargic team out there that's kind of waiting on the next man or waiting on somebody else to make plays.

Newton wants his M.O. as a father to be the same as that of his dad, Cecil, who was at the center of an NCAA investigation over whether money was sought in exchange for Newton to commit to Mississippi State.

Newton went to Auburn, where he led the Tigers to the 2010 BCS National Championship and won the Heisman Trophy.

"He was everything I could ask for and more," Newton said of his father. "For him to get bashed and tormented in the media, but our personal relationship has become stronger over the years. I respect that. I understand that.

"Every man should have that father figure in their life. I know, especially where I grew up, it wasn't a lot of people that had men in their life. At times I questioned that sometimes my father was too hard on us. My mom could attest to that. Now that I'm lucky enough to have a son, I'm going to be the same way."

Asked about his plans for New Year's Eve, Newton gave an answer that many might not consider so cool.