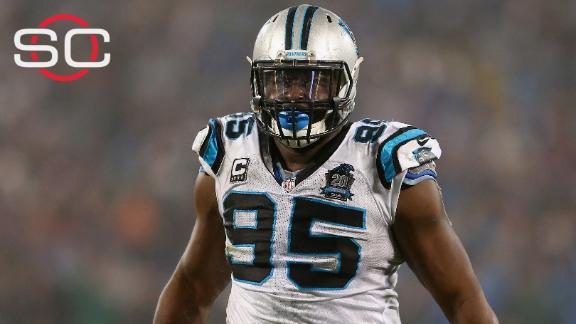 The move clears $11 million in salary cap space as Johnson was set to count just over $15 million against the 2016 cap -- the third-highest cap hit among NFL defensive ends.The team will carry $4 million of "dead money" on this year's cap leftover from the remainder of Johnson's prorated signing bonus.

"Charles was an impact player for the Carolina Panthers for a long time, both on and off the field," general manager Dave Gettleman said in a release. "His statistics speak for themselves, and as a team captain he led the way you want your leaders to lead -- by example.

"I wish him the best moving forward."

The Panthers have approximately $27.6 million in cap space.

There's still a chance the Panthers could re-sign Johnson in free agency, according to a league source.

Johnson, who will turn 30 this offseason, has a career total of 63.5 sacks, which ranks second on the team's all-time list behind Julius Peppers (81). He had only one sack during the 2015 season, in which he missed seven games with a hamstring injury.

"Charles fought through adversity with his injury last season and set a great example for our locker room as a captain," coach Ron Rivera said.

The Panthers drafted Johnson with a third-round selection in 2007.

The move means the Panthers must replace both starting defensive ends from last season. Jared Allen retired earlier this offseason.

Kony Ealy, who had three sacks and an interception in the Super Bowl, is expected to take over at one of those spots but the other remains vacant. The Panthers recently visited with former Jets and Dolphins defensive end Quinton Coples, but no agreement has been reached.

The Panthers could address the need in the draft or free agency.

Edwards spent four seasons with the Panthers. He appeared in 12 games in 2015 and had 14 tackles and one sack.

Also on Thursday, the Panthers re-signed backup free agent offensive guard Chris Scott to a one-year contract. Terms of that deal were not announced.