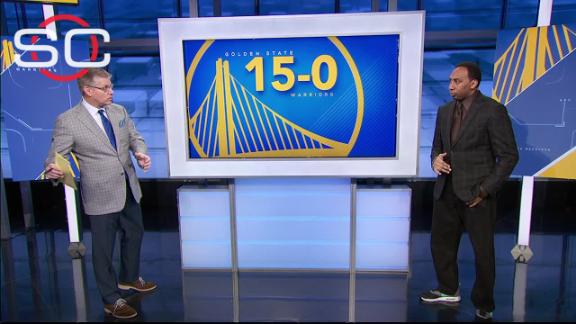 MIAMI -- Pat Riley played alongside Jerry West and Gail Goodrich, the guards whose exploits from the early 1970s still have the Miami Heat president saying they were the best backcourt he ever saw.

From Riley, these are ultimate compliments -- comparing anyone to West and Goodrich, or one team to that 1971-72 Los Angeles Lakers team that won 33 consecutive games and rolled to the NBA championship. But that's the level of the praise he's doling out these days to Stephen Curry, Klay Thompson and the rolling Golden State Warriors.

"They are the two most dynamic players in the backcourt, that I have ever seen, since Jerry West and Gail Goodrich," Riley said. "Go back and check their numbers, 25 points apiece and Jerry leading the team in assists, Gail shooting close to 50 percent or whatever it was. Both of them could shoot it, could drive it, could pass it. That's what you're seeing here."

And the Warriors have matched the NBA record for the best start to a season by beginning 15-0, something that Curry even called "a huge accomplishment" after Golden State got there by topping Denver 118-105 on Sunday night.

"They are in the beginning of something that can be dynastic," Riley said. "They're in the beginning stages of it, and that's the scary part, versus somebody that catches lightning in a bottle one time. They're at the beginning because all of their key players, all of them, are young and they're talented. The ones that aren't have what I call 'youth age,' like Andre Iguodala, Andrew Bogut, Shaun Livingston -- those guys bring an element to the team is incredible."

The Warriors could grab the outright best-start record with a win over the Lakers on Tuesday. Riley believes they're primed for much more than that, and the man who knows something about championships -- he does have nine rings in his collection -- said Golden State should remain in the title mix for the foreseeable future.

"They're at the beginning of something," Riley said. "It's going to be very difficult to challenge them. But that's what we're here for."