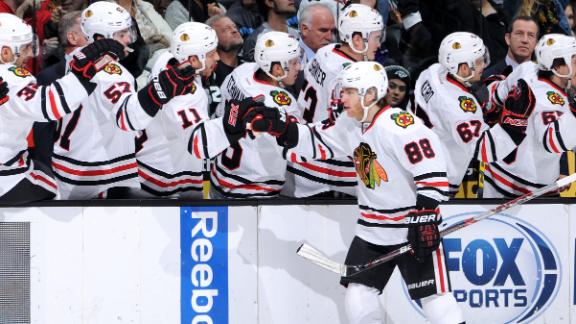 Kane scored a power-play goal midway through the first period of the Blackhawks' road trip finale against the Los Angeles Kings, beating Jonathan Quick with a high wrist shot and celebrating with a yell and a fist pump.

Kane's 14th goal of the season broke his three-way tie with American-born players Eddie Olczyk and Phil Kessel, who both had 18-game scoring streaks. The streak is the second-longest in Blackhawks history, tying a streak by Denis Savard 30 years ago.

Kane added an assist on Niklas Hjalmarsson's goal in the second period of the Blackhawks' 3-2 overtime loss, giving him 31 points during the streak.

"It's cool," Kane said. "You think about how many great American players have played the game, the two players that had that 18-game points streak and what they've done in their careers. So it's pretty cool right now, but kind of overshadowed by the loss."

Kane has 11 goals, 20 assists and nine multipoint games during the streak, which began Oct. 17. The three-time Stanley Cup champion also leads the NHL in scoring with 37 points, holding off Dallas teammates Jamie Benn and Tyler Seguin while scoring in 22 of the Blackhawks' 24 games this season.

Kane has been energized while playing largely on a line with new teammates Artem Anisimov and rookie Artemi Panarin, although coach Joel Quenneville still occasionally teams him with captain Jonathan Toews.

"Amazing to watch," Quenneville said of Kane. "Pretty amazing ... shift out, shift in, what he's been doing with the puck -- generating, creating. That line offensively for us has been the backbone of our team. He's been great. Can't say enough positive things about him or his play."

Olczyk had points in 18 straight for Toronto from Dec. 1989 to Jan. 1990, while Kessel did the same for Boston in late 2008. Olczyk is a color commentator for Blackhawks games and Kane knows him well, and Kessel was Kane's teammate on the U.S. Olympic hockey teams in Vancouver and Sochi.

"I think it definitely adds a little bit more to it," Kane said. "I've become pretty close with Eddie over the years here, to the point where I ask him for advice on a lot of different things and he's willing to share a lot, too. And then I've known Phil pretty well since I was 16 years old. So two great players, two great careers and it's fun to be there with them."

Kane has played some of the best hockey of his remarkable career during a season that began under a dark cloud.

On Nov. 5, Buffalo prosecutors announced they wouldn't file criminal charges against Kane after a three-month investigation of an accuser's claim that she was raped at Kane's offseason home in a city suburb. Kane repeatedly said he had done nothing wrong, and the Erie County district attorney claimed that forensic evidence contradicted the claims of the accuser, who eventually said she did not want to press charges.

The longest scoring streak in Chicago history was Bobby Hull's 21-game string during the 1971-72 season. The Blackhawks host Minnesota on Tuesday night, travel to Ottawa on Thursday night and return home to face Winnipeg on Dec. 6.

"I think in this day and age it's pretty tough to be consistent every night, especially with how smart coaches are line-matching and how good the defense is in this league right now," Kane said Friday in Anaheim after tying the U.S. mark. "It's exciting. I don't want to think about it too much, just try and enjoy it."