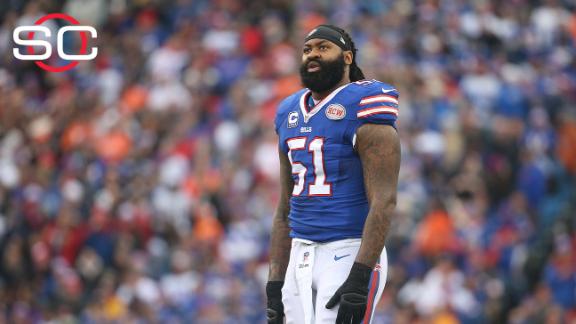 Spikes played for the Patriots from 2010 to 2013 before signing a one-year deal with the Bills in 2014. His departure from New England included some fireworks, as he was placed on season-ending injured reserve in the playoffs and questioned the team's decision to do so.

ESPN NFL Insider Chris Mortensen had reported that the Patriots and Spikes mutually agreed to the IR designation as opposed to an outright release after the linebacker was late to a team meeting that week. That essentially ended any chance Spikes would return in 2014, with the hard-hitting outspoken linebacker saying he was happy to move on to "somewhere you're wanted."

After signing with theBuffalo Billsin 2014, he tweeted some shots at the Patriots, including "4 years a slave" to refer to his first four seasons in the NFL with New England.

One year later, circumstances have changed.

Spikes was a free agent once again and no longer viewed as an ideal fit in Buffalo, which is changing schemes under first-year head coach Rex Ryan. Meanwhile, the Patriots have been looking for experienced linebacker depth as starters Jerod Mayo (patellar tendon) and Dont'a Hightower (labrum) continue to rehabilitate.

The 6-foot-2, 255-pound Spikes, who is considered a strong player against the run but a liability at times in the passing game, has played 67 career regular-season games and has been credited with 340 tackles.

ESPN's Field Yates and Adam Schefter contributed to this report.