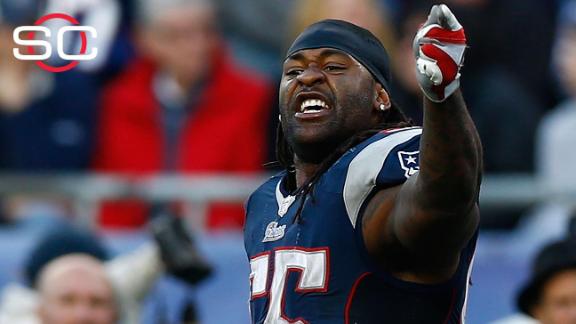 TheNew England Patriotsreleased linebacker Brandon Spikeson Monday morning after his damaged car was found abandoned on I-495 in Foxborough, Massachusetts, a day earlier.

Shortly before 3:30 a.m. ET Sunday, police responded to a report of a 2011 Mercedes Maybach in the median strip. Police initially said they were notified by a representative of the OnStar on-board navigation system that the driver had reported hitting a deer. In fact, Mercedes' own service, Mercedes-Benz Roadside Assistance, alerted police.

When police arrived at the car, the driver was not present. Police said they did not find a deer in the area.

In addition, Massachusetts State Police spokesman David Procopio said that a short time later, police responded to a report of a 2009 Nissan Murano, also on I-495 in the same area as the abandoned car registered to Spikes, whose occupants reported that they had been rear-ended by another vehicle they did not see.

A caller told a police dispatcher that a "vehicle had struck another vehicle and the operator fled" during a 911 call about 3:39 a.m. Sunday.

A dispatcher advised another caller at 3:41 a.m. that there was a car abandoned in the high-speed lane and it was "believed the person fled."

All three occupants of the Nissan Murano -- a 51-year-old man, a 32-year-old woman and a 12-year-old boy, all of Billerica -- were transported to a hospital for examination and treatment.

Police have not filed charges but said Monday that the investigation into both incidents -- including who was driving the Maybach and what car struck the Murano -- is ongoing.

Procopio said the investigation will seek to determine whether there is any connection between the reported incidents. No connection has yet been definitively established.

Spikes' 2011 Mercedes Maybach is a superluxury sedan that costs in the neighborhood of more than half a million dollars. It is the highest-priced car model manufactured by Mercedes-Benz and is designed to compete with other luxury brands such as Rolls-Royce and Bentley. It includes many added extras such as a massaging, back-seat recliner, sheepskin interiors and its own signature perfumed air-filtration system.

The move then was a surprise considering how Spikes' time with the team ended and some of his critical remarks about the franchise on social media.

Spikes' departure from New England in 2014 included some fireworks as he was placed on season-ending injured reserve in the playoffs and questioned the team's decision to do so.

ESPN NFL Insider Chris Mortensen had reported that the Patriots and Spikes mutually agreed to the IR designation as opposed to an outright release after the linebacker was late to a team meeting that week. That essentially ended any chance that Spikes would return in 2014, with Spikes saying he was happy to move on to "somewhere you're wanted."

After signing a one-year deal with the Buffalo Bills in 2014, he tweeted some shots at the Patriots, including "4 years a slave" to refer to his first four seasons in the NFL with New England.

After returning to the Patriots in May, Spikes said, "We can clearly see that me and 'The Hoodie' kissed and made up," Spikes said of coach Bill Belichick. "I'm here, that's in the past, and I'm moving on."

Spikes' past with the Patriots also included the NFL investigating a compromising video of him with a woman that was posted online, as well as a four-game suspension at the end of that year for violating the NFL's performance-enhancing substances policy.

A second-round selection by the Patriots out of Florida in 2010, Spikes has 340 total tackles, two sacks, six forced fumbles and two interceptions in his five NFL seasons.