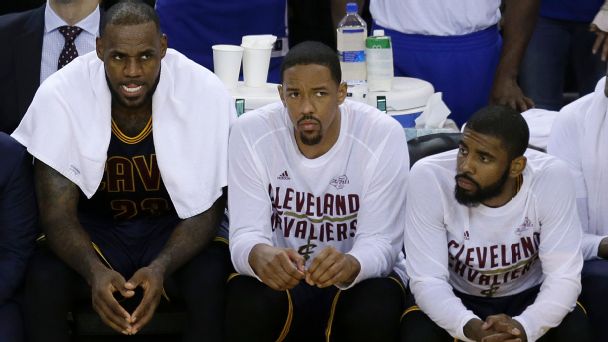 This week's mailbag featuresyour questions on what would have helped the Cleveland Cavaliers in potential trades, cap space parity and more.

You can tweet your questions using the hashtag #peltonmailbag or email them to peltonmailbag@gmail.com.

"Saw Jimmer Fredette re-signed with the Shanghai Sharks, which begs the question: Why don't more NBA players who flame out or are past their prime end up in Europe? Seems like it's much rarer than it should be. I thought Josh Childress signing with Olympiacos was supposed to herald the procession of players across the Atlantic."

Let's take the second part of the question first. When Childress passed on NBA offers to play in Greece in July 2008, it seemed like the beginning of a period when top European clubs could compete with NBA teams for free agents. What we didn't know then is that the Greek economy was on the verge of crisis. Other countries with European powers, most notably Spain, suffered similar economic downturns at the same time. So salaries failed to keep pace with the NBA, something that has been exacerbated by the growth in the NBA salary cap with the new TV deal.

As for ex-NBA players heading overseas, I'm not sure I would describe it as rare. The Chinese CBA and European leagues certainly are filled with former NBA players, if perhaps not quite as many as you would expect, provided players were strictly basing their decision on where they could make the most money. (In that case, few players would ever stay in the U.S. to play in the G League.)

Not everyone can adjust to living abroad or the different style of play and particularly coaching. I enjoyed Aaron Jackson's discussion on the Dunc'd On podcast earlier this week of difficult travel and practice schedules and demanding coaches that make playing internationally tougher, in his view, than the NBA's busier game schedule.

It's probably more difficult to make those adjustments the longer a player has been in the NBA, and a longer career means less need to make money playing overseas. Also, past-their-prime players often have families they don't want to leave behind. So I don't think it's terribly surprising that some players choose to either play for less money in the G League or quit playing altogether rather than heading abroad.

"Reading about [Kyrie] Irvinghas me thinking back to the proposed Kevin Love Indy-Denver-Cleveland trade. Of course, it's moot now, but I wonder if the Cavs, aiming specifically to beat theWarriorsthis year, would have been better off getting some package centered on Gary Harris, Wilson Chandler and Will Barton, rather than getting Paul George? Or is George so good -- and (somewhat) able to defend [Kevin] Durant-- that you'd rather have him over a collection of pieces that can all somewhat defend and somewhat shoot?"

Hmm. Certainly, a two- or three-for-one trade would have done wonders for the Cavaliers' depth, which was an issue against Golden State in the 2017 NBA Finals. Still, I think George is so much better than any of those players individually that I would rather have him than the package.

Specifically, I'd say that with George, Cleveland would have had a five-man lineup well-equipped to defend the Warriors, and the extra depth isn't as important as maximizing that best possible lineup.

No, almost certainly not. The obvious issue here is that cap space isn't equally valuable for all teams, and it's likely to be less valuable for lottery teams that probably will have to overpay to get players to join them.

The other problem is that cap space tends to be easiest to use on unrestricted free agents who by their definition are at or more likely past their primes. Giving losing teams more money to spend might provide them a faster path toward playoff competitiveness but would not provide the long-term upside they currently get from young draft picks. (Teams also could use the cap space to take on bad contracts in exchange for picks, but that's a much more indirect method than just giving them better picks.)

I'm a big believer in the concept that teams are either selling wins or selling hope, and it's a lot easier to provide the latter with young players who fans can watch develop, rather than the ability to sign veteran free agents.

I wish I knew the answer to that!

As I discussed on this week's episode of the Fabulous Peltoncast, the Seattle sports (and food) podcast I co-host with my brother, I think people are reading too much into NBA commissioner Adam Silver's comment to Portland Trail Blazers guard CJ McCollum in an interview for the Player's Tribune that expansion is "inevitable at some point." "Some point" could be next week; it's a lot more likely to be closer to a decade away.

Silver used similar language when asked about expansion by Danny Leroux of RealGM.com during his media availability before Game 1 of the NBA Finals: "I have no doubt at some point we'll turn back to [expansion]." In that case, his expression of long-term interest in expansion was overshadowed by also saying earlier that it's "not something we're looking at right now." I think that sums up where we currently stand.

Of course, while expansion is the clear preference among Sonics fans for getting their team back, it is possible for the NBA to return to Seattle without expansion if an existing franchise moves. There's no obvious candidate to relocate in the immediate future, though things can change quickly on that front. The Sonics went from demanding public funding for a renovation or replacement of KeyArena in February 2006 to Oklahoma City less than 2 years later.

Either way, the first step is the Seattle City Council approving one of the two arena plans currently in front of them: a proposal by the Oak View Group to renovate KeyArena into an NBA/NHL arena, as well as the existing proposal to build an arena south of Safeco Field from the group led by Chris Hansen that attempted to purchase and move the Sacramento Kingsto Seattle in 2013. A decision between those two plans is expected by December.

So, to answer the question, I'd put the odds of the Sonics' return within the next five years pretty low: maybe 5 to