Percy Harvin: 'All smiles' with Jets 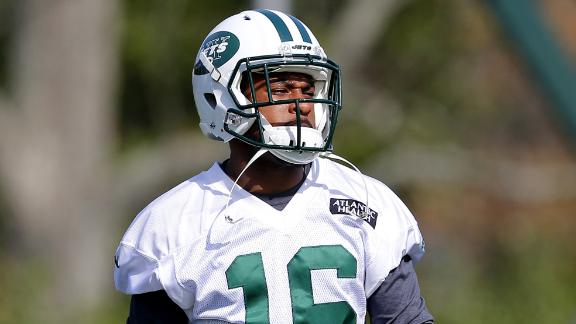 FLORHAM PARK, N.J. -- Percy Harvin went from the defending Super Bowl champions to a 1-6 team, but his upbeat demeanor Monday suggested he's glad to be out of Seattle.

Admitting he was frustrated by his role with the Seattle Seahawks, Harvin said he welcomes a fresh start with the New York Jets, who traded a sixth-round conditional pick last Friday for the mercurial wide receiver.

Harvin acknowledged he was involved in altercations with former teammates Doug Baldwin and Golden Tate, who received a black eye during the run-up to the Super Bowl last February. He wanted to clear the air with his new employers, but he said coach Rex Ryan laughed and wasn't interested in re-living the past.

"The coaching staff, the management, on to the owner, they're not worried about (my past)," Harvin told reporters after his first practice. "I even tried to explain a couple of things. They told me to be quiet and not to worry about it. It's been all smiles here."

Seahawks coach Pete Carroll said Monday that he believed he could make Harvin happy in Seattle. But Harvin never attempted to mesh with his teammates despite the efforts of Carroll, the Seahawks' coaching staff and management, a team source told ESPN's Ed Werder.

The source told Werder that Harvin was "always unhappy, always agitated" during his time with the Seahawks.

Harvin will make his Jets debut Sunday against the Buffalo Bills at MetLife Stadium. He will play receiver and return kickoffs, but his role on offense will hinge on how much of the playbook he can absorb.

The Jets were thrilled to add Harvin, downplaying his reputation as a disruptive presence in the locker room.

"I'm very comfortable with him," said Ryan, who believes Harvin will add a playmaking dimension on offense.

For most of his 10-minute session with the media, Harvin was grilled about his stunning ouster from the Seahawks. They unloaded him less than two years after acquiring him for three draft picks, including a first-rounder, from the Minnesota Vikings.

Harvin said his role "definitely was" a source of frustration, but he denied reports that he refused to re-enter the game in last week's loss to the Dallas Cowboys.

In six games, Harvin had only 22 receptions for only 133 yards and no touchdowns.

Harvin also was upset that word of his fight with Tate, which occurred before the Seahawks took their team picture at the Super Bowl, was leaked to the media.

"We had an incident," he said. "I don't really want to get into the details. The way I go about my business is keeping everything in-house. For whatever reason, they decided to unleash things."

Harvin said he didn't ask to be traded, adding that he never expressed his unhappiness to the coaches. He admitted he made mistakes in Seattle, but that he wants to move on.

Right tackle Breno Giacomini, who played last season for the Seahawks, said he witnessed the Harvin-Tate scuffle. He downplayed it, saying, "Who cares? It was squashed right away. ... People get in fights all the time. This is the game of football."

Giacomini described Harvin as "a good teammate," saying the media was blowing the altercations out of proportion.

Harvin, known to be surly as times, smiled throughout his interview session, appearing slightly nervous. He met Ryan in 2009, when the Jets were targeting him in the draft.

Harvin's locker is only two away from backup quarterback Michael Vick, and that's no coincidence. They grew up in Virginia Beach, Virginia, and they've been close friends for years. Harvin said it's a "blessing" to be with Vick.

Harvin is signed through 2018, but there's no guaranteed money in his contract beyond this season, so the Jets can cut him without any cap implications. He has plenty of incentive to make this work -- a $10.5 million salary in 2015.

"It's definitely a place I want to be for a long time," he said.

Percy Harvin Happy To Be A Jet
Jets WR Percy Harvin discusses the trade that sent him from Seattle to New York.