Percy Harvin unretiring to join Bills for remainder of season 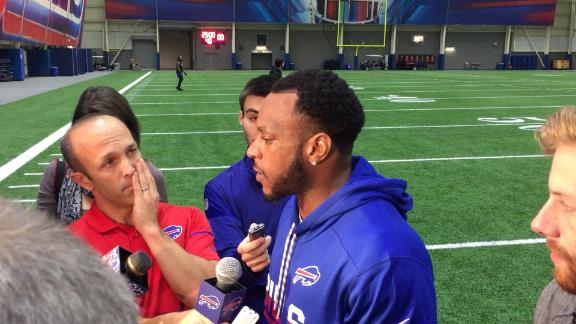 ORCHARD PARK, N.Y. -- With their depth at wide receiver thinned by injuries, the Buffalo Bills lured former first-round pick Percy Harvin out of retirement to sign with the team for the rest of the season.

Harvin, 28, announced his retirement in April after ending last season on injured reserve. The Bills signed Harvin during the 2015 offseason, and he played in the first five games of last season before he was sidelined by lingering hip and knee injuries.

Harvin had his injured knee scoped in January and said Tuesday that he decided to retire because his body wasn't allowing him to play at the level he wanted.

"It was time for me to just step back, let my body heal without trainers putting a timeline on it or being rushed," he said.

"I actually thought I was done. I was at peace pretty much the first five weeks of the NFL [season]. I really wasn't focused on football, I didn't have an urge to go play. I was just kind of relaxing and letting my mind just chill. As the five weeks went by, the next month came and the body started feeling good, so the mind started wandering a little bit."

The Bills have been without Sammy Watkins (foot) for the past six weeks, and he is not eligible to return to play from injured reserve until Nov. 27. Robert Woods has also been limited in recent weeks with a foot injury, while depth options Greg Salas (groin/injured reserve), Marquise Goodwin (concussion) and Brandon Tate (concussion) also have missed time.

Because Harvin has not practiced or played in over a year, Whaley acknowledged that the receiver might not be able to play Monday night against the Seattle Seahawks.

"He's a dynamic playmaker," Whaley told reporters Tuesday. "We'll see if he can regain that form. He has confidence in himself, and we have confidence that he can get back to that level. When that will happen, obviously that's going to take some time. Maybe it's not, but that's what the practices are for, and that's why we wanted to get him in now.

"With Seattle coming up and then the bye week, and then the week before [Week 11 against] Cincinnati, we can get a good three weeks of working him in and getting him back to football shape and integrated into this offense."

Whaley said that there was "minimal contact" with other teams prior to Tuesday's 4 p.m. NFL trade deadline and the Bills preferred re-signing Harvin because it did not require giving up draft assets or a player in a trade.

In Buffalo last season, Harvin showed brief flashes of what made him a star early in his career. He caught a 51-yard touchdown pass in the regular-season opener and caught 19 receptions for 218 yards in five games before being sidelined because of his injuries. When Harvin did not travel to London with the Bills for a Week 7 game last October, coach Rex Ryan said, "I don't know where he is right now."

"That whole thing, it was a bunch of frustration, not knowing whether to rehab, whether to go with the doctors up here, whether to listen to my body," Harvin explained Tuesday. "It was a lot of things I was trying to play out in my head."

To make room on their 53-man roster for Harvin, the Bills placed sixth-year starting safety Aaron Williams on injured reserve because of a neck injury.

Williams did not practice or play last week after being blindsided on a block from Miami Dolphins wide receiver Jarvis Landry on Oct. 23. Williams was taken to a hospital for evaluation but was later cleared to travel back to Buffalo with his team. Landry was later fined $24,309 for the hit, which was flagged for unnecessary roughness but did not result in an ejection.

Williams' father told The Associated Press last week that his son would reconsider his playing future after this season. Williams, 26, missed 13 games last season because of a neck injury suffered when trying to make a diving tackle in a Week 2 loss to the New England Patriots. He was taken from the field in an ambulance during that game and experienced numbness in parts of his body that required surgery to shave vertebrae in his neck.

Whaley did not rule out making Williams the Bills' designated player to return from injured reserve later this season, although Williams is not eligible to return to practice until Dec. 13 and cannot play until the regular-season finale against the New York Jets.

Harvin, who was selected with the 22nd overall pick of the 2009 draft out of Florida, has 351 career receptions for 4,020 yards and 22 touchdowns. His production has dipped since posting career highs in catches (87) and receiving yards (967) for the Minnesota Vikings in 2011.