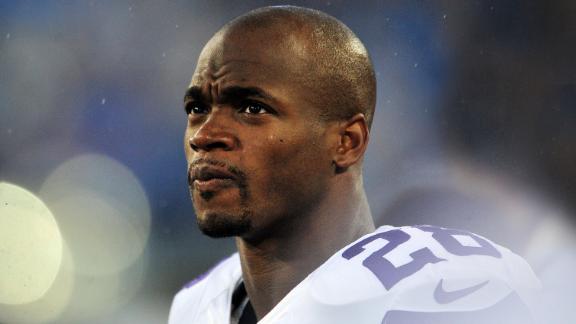 Minnesota Vikingscoach Mike Zimmer and GM Rick Spielman will fly to Texas on Wednesday to meet with Adrian Petersonat his home outside Houston, a league source told ESPN.com's Ben Goessling.

Peterson's wife, Ashley, will also be present for the meeting, in which Zimmer and Spielman will try to convince the 2012 league MVP that he should remain with the Vikings after missing almost all of the past season while addressing child abuse charges in Texas.

It will be the first time since September that Peterson will meet face-to-face with Vikings officials, and time is of the essence. The new league year, including trades and free agency, begins Tuesday.

Peterson, who was placed back on the commissioner's exempt list this past Thursday after federal judge David Doty ordered the NFL to vacate his suspension over child abuse charges, can once again talk directly with the Vikings.

Spielman said Monday the team has had "open dialogue" with Peterson since Thursday. Spielman would not elaborate on the Vikings' conversations with Peterson but said the team wants him back next season.

"We are able to have communication now with Adrian," Spielman said. "We'll keep all those communications internal. I think it's been very clearly stated we want Adrian Peterson back. He's a unique talent, and he's under contract with us."

Peterson told ESPN last month that he was "uneasy" about returning to the Vikings and added that he knew the team would not force him to stay in Minnesota if he decided he did not want to play there. Spielman would not comment on whether there is a rift between the star running back and the organization.

But another source with knowledge of the situation told Goessling that Peterson is meeting with the Vikings because of his respect for Zimmer.

No one has been more vocal in his support of Peterson than Zimmer, a straight-talker who coached Peterson for only one game in his first season on the job. Throughout the past season, while the legal process played out, Zimmer was the lone Vikings voice to regularly back Peterson.

Doty on Thursday said the arbitrator failed in his duties and sent Peterson's case back to the league. The NFL is appealing Doty's ruling. It has removed Peterson from the suspended list and placed him back on paid leave, which allows the running back to meet with Zimmer and Spielman.

The case could also return to arbitration or be settled.