Phil Jackson: I have free reign 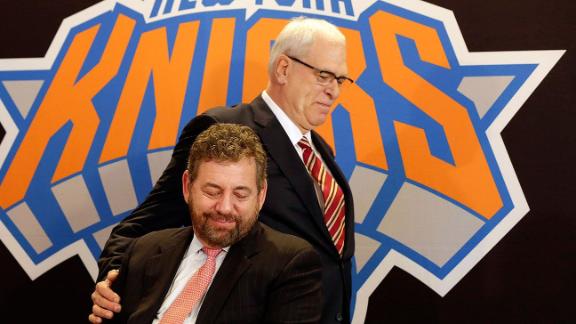 NEW YORK -- Knicks president Phil Jackson believes owner James Dolan has been "forced to meddle" in basketball decisions in the past. But Jackson said he has received assurances from Dolan that it won't happen again as long as he's running the team.

Jackson said Sunday that he spoke to Dolan about having full autonomy to make basketball decisions before he accepted the job as Knicks president.

"I was point blank and honest with him and said, 'If I walk into your office or call you up on the telephone and tell you that I want to trade X player who's an All-Star or Y player who's the fans' favorite, if I think it's the right move, I want you to feel confident that I can do this, will you give me the liberty to do this?' And he said yes, and that's really the key," Jackson said while speaking at The New Yorker Festival in Manhattan.

Jackson's authority extended to the team's decision to re-sign Carmelo Anthony, according to the team president. Dolan told Jackson before he took the job in March that if Jackson didn't feel signing Anthony was the "right direction to go, then you don't have to sign him."

"I had that liberty to make that choice and needed to have that to come and do the job the right way," said Jackson, who inked a five-year, $60 million deal to run the Knicks.

"He has just touched the surface of his greatness, and I think we have a guy that has a lot more to offer," Jackson said of the 30-year-old Anthony.

Dolan has a strong relationship with Anthony, and many observers wondered whether he would strong-arm Jackson during negotiations with Anthony over the summer.

Dolan has had a history of interfering with decisions made by his basketball executives. One of the most oft-cited instances came in 2011, when he orchestrated the team's trade for Anthony over the wishes of then-GM Donnie Walsh. Dolan also fired then-GM Glen Grunwald days before the past season's training camp. Grunwald built a team that won 54 games in the regular season and snapped the franchise's 13-year streak without a playoff series win.

"He has this tremendous competitive drive and wants to really do well," Jackson said. "In the process, he's gotten involved in basketball simply because things have happened in this organization that have irritated him.

"Some of the ways that the teams have been handled, some of the decisions that have been made on players that were brought in and were costly to the organization, hampered and handcuffed them to making changes. So he felt obliged and obligated to get involved in it so he could correct the inadequacies or errant direction in which the organization was going. ... So he's been involved in it on some level, and as a result there are some things that have happened where he's looked like he's meddled. And I think he had to meddle at some point. He was almost forced to meddle in some situations. That word meddle might be a little bit harsh to even use."

Dolan has said that he isn't as involved with the team now that Jackson has taken over.

He instead has chosen to focus on working with his blues band, JD and the Straight Shot.

"Hopefully, I can allow him to [play music] and relieve him of many of the pressure that's about basketball," Jackson said. "And we can go forward, and he can enjoy what he's doing in the musical world."