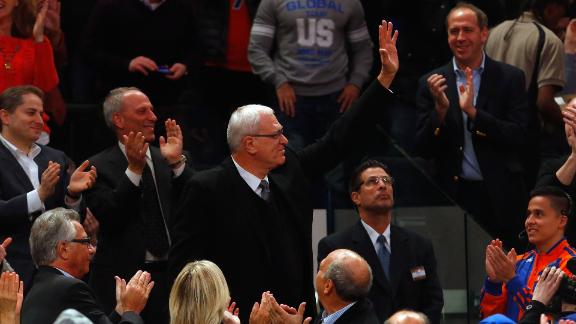 "It only takes one bidder out there that has the ability and can ruin your hopes and your chances," Jackson said.

Anthony has said he plans to opt out of the final year of his contract this summer. On Friday, Jackson said the two have talked about the possibility of Anthony opting in to the final year of his deal and testing free agency in the summer of 2015 instead, and that Anthony said he would "think about it."

"I told him it might be a good idea to hang in here and see what it's like for a year and go out the next year," Jackson said. "But that's his option, that's what he's earned, and that's what's part of his contractual agreement. He has the right to do that. But I just offered that as, 'Look, this gives you an opportunity to see how this is going to change, see how we're going to get going, your relationship to the team and the coach and the system or whatever, the system we impose."

Even if he decides to test the market this summer, Anthony can make more money if he re-signs with the Knicks instead of another suitor. With the Knicks, he could get a five-year contract worth around $129 million. If he signs with another team, the maximum he can be paid is $95.8 million over four years.

Jackson addressed the possibility of Anthony signing with a competitor Friday by saying, "if so, we will survive it."

He also addressed the Knicks' ongoing coaching search, saying that he has interviewed several candidates. He referred to Thunder guard Derek Fisher as "a person that's on my list of guys that could be very good candidates for this job."

However, Jackson made it clear that he's unsure whether Fisher, who is expected to retire at the end of the season, will be willing to coach.

"He's got family in L.A. He's got little kids still in L.A. I have no idea if he wants to move his family and come here," Jackson said. "Those are things that he would have to express. There are so many unknowns."

Jackson also said he did not plan to reach out to the Nuggets to try to work out a compensation package to acquire Denver coach Brian Shaw.

"Denver has everything that we owned for the last few years, so there's nothing else I want to give them," Jackson said in reference to the two first-round draft picks the Knicks sent to the Nuggets in acquiring Anthony.

On the prospect of Jackson himself coaching the team, the 13-time world champion said, "Unless the Lord heals in me in the next week or two, I wouldn't see myself being physically prepared to take on the grind of coaching a basketball team right now."

The idea that Jackson could coach for one season as a transition period and hand over the reins to another coach next year has been discussed, he said. But Jackson said he would not be comfortable with coaching in that capacity next season.

"Unfortunately for him, he committed to me the day before the job opened with Golden State. So I had to kind of release him to actually go to this job and say, 'You have to do what's right for yourself,'" Jackson said. "I understood entirely the process he was going through to have that job open up. That was something he kind of thought would be a good fit for him. So that's good, we're happy for him."

Jackson added that he's considering coaches in the college ranks and coaches with experience, but he hinted that he'd be most interested in hiring a coach without much experience. He also said he would like to hire a coach with whom he has a prior relationship, "so that we know that we've gone through some kinds of issues together."

He doesn't expect the search to extend into July. The Knicks fired Mike Woodson on April 21.

"I think we're just trying to get through this period of time and wait for a collection of individuals we feel will be the right people to talk to and then go forward," Jackson said.