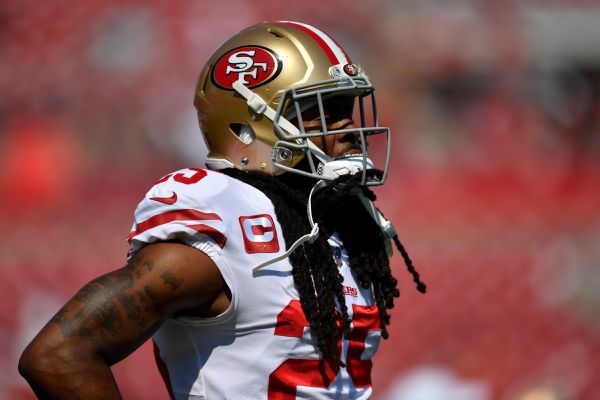 ESPN
By Nick Wagoner
TAMPA, Fla. -- In the offseason, San Francisco 49ers cornerback Richard Sherman was vocal in his opposition of the new rules allowing teams to challenge pass interference calls and non-calls.

On Sunday, Sherman was on the wrong end of the first successful challenge of a no-call for defensive pass interference in a regular-season game in NFL history.

With 10 minutes, 27 seconds to go in the first quarter of the Niners' 31-17 victory against the Tampa Bay Buccaneers, quarterback Jameis Winston fired a pass deep down the right side intended for receiver Mike Evans.

On the play, Evans and Sherman grabbed at each other, with Evans initiating contact, but as the ball arrived, Sherman had his hands on Evans' jersey after Evans has disengaged. The pass fell incomplete, but Bucs coach Bruce Arians quickly threw a challenge flag.

After a short review, officials overturned the no-call and penalized Sherman, moving the ball 16 yards to Tampa's 35 with a new set of downs.

"It was odd because I had asked the referee because Mike pushed off and once he pushed off, I did have a hand in but it kind of seems like it's tick-tack there," Sherman said. "I talked to the ref and he says he didn't see the push-off, and I'm like, 'Well, I don't know what you're watching because he literally two-hand shoved me,' and the tug [by me] was just to get back into the fray. So that felt like it was even. I don't even think Mike felt like it was a flag. But it is what it is. You've got to just keep moving and keep playing. I've been in this league long enough to understand that one play doesn't define you, and you have got to stay on top and stay doing your job and you'll get a chance."

Sherman was penalized again five plays later for defensive holding and wanted a challenge from Niners coach Kyle Shanahan, but the play was not reviewable because it was for holding and not pass interference.

The NFL instituted the option to challenge pass interference calls and non-calls in March following the leftover controversy from the NFC Championship Game between the New Orleans Saints and Los Angeles Rams.

Sherman has not hesitated to speak out in the time since. During training camp, Sherman said he planned to not worry about the possibility of a challenge while in coverage. He reiterated that stance Sunday while again voicing his displeasure with the rule.

On that play, Jets quarterback Sam Darnold threw an apparent 5-yard touchdown pass to tight end Ryan Griffin. Buffalo challenged the call for a possible offensive pass interference and the play was reversed, overturning the touchdown and costing the Jets 10 yards.

Sherman was able to extract similar revenge for the overturned call that went against him, coming up with an interception he returned for a touchdown in the third quarter. Sherman said he recognized the route being run by back Peyton Barber, and he waited for Winston to move on the throw before jumping on it. After securing the ball, Sherman returned it 31 yards for a touchdown and a 20-7 lead.

It was Sherman's first interception and touchdown since signing with the 49ers in 2018, but the heat and humidity of Tampa didn't exactly have him in the mood for an over-the-top celebration.

"I'm not going to lie, I just was tired," Sherman said. "Today was one of the hottest games I've ever been a part of. That's why you don't have much for celebration. Your body is in survival mode and you're just trying to stay on top and try to get your job done as best you can. But it felt good.

"I'm sure I'll enjoy it more later on, but I'm just happy for our defense. I'm happy for our team. We played sloppy today, but it's the first game -- we've got to knock out some of the wrinkles. We have got to find a way to play a more mistake-free football game, myself included. I had a couple of penalties that I shouldn't have had. Just ticky-tack. I've got to put myself in better position. And we have got to hold ourselves to a standard. It was a decent game for us but we have got to get better." 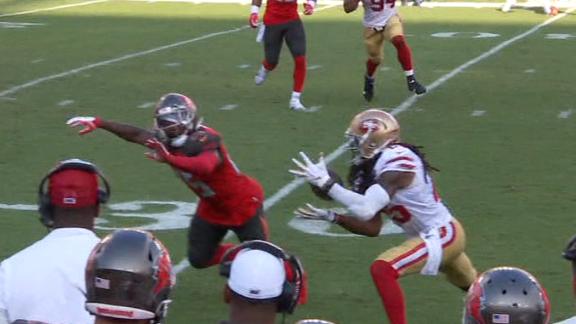