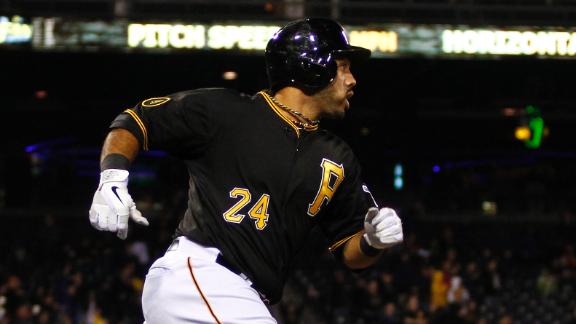 The combination that's returned the franchise to respectability will remain intact for years to come.

Hurdle and Huntington agreed to new deals on Saturday that will keep them in Pittsburgh through at least 2017, giving the Pirates the kind of internal stability they haven't enjoyed in decades.

"There's no place I'd rather be," Hurdle said.

Financial terms were not disclosed. The contracts include a club option for 2018. Both Huntington and Hurdle, chosen the 2013 National League Manager of the Year after leading the Pirates to 94 wins and a playoff berth, were in the final year of their current deals.

Reaching a new agreement was a mere formality after a thrilling season in which Pittsburgh qualified for the playoffs for the first time since 1992 and pushed the St. Louis Cardinals to five games in the NL division series.

"I think we have a very solid team in place and they deserve the recognition," owner Bob Nutting said. "I think great organizations are stable organizations. Again, never static and never on autopilot ... (but) I'm proud of the culture and the tone that the current team has."

It's a tone that Huntington set from the day he took over in September, 2007. Faced with restocking a decimated minor league system and constrained by playing in a small market that makes splurging on high-profile free agents nearly impossible, Huntington has painstakingly rebuilt the Pirates from the inside out while stressing that success at the major league level would be the last step.

Those steps coincided with Hurdle's arrival in December, 2010 and the emergence of talents like homegrown star Andrew McCutchen, the reigning NL MVP. Pittsburgh has upped its win total in each of Hurdle's three seasons, from 70 in 2011 to 79 in 2012 to 94 a year ago.

Hurdle stressed most of the hard work was done before he was hired to replace Jim Tracy two months after the Pirates lost a whopping 105 games in 2010..

"When I was able to come in, just finding what we had, what had gone on, I felt confident the next move that took place would be here, the renaissance," he said.

One the Pirates have no plans on stopping.

The 27-year-old McCutchen is signed through 2018 and 25-year-old left fielder Starling Marte signed a new contract last month that could keep him with the team through 2021. Throw in the rapid development of former top pick Gerrit Cole -- who picked up his first win of the season on Friday night -- and the impending arrival of right field prospect Gregor Polanco and the farm system that used to be bereft is now among the most promising in all of baseball.

While Hurdle insisted he wasn't concerned about his contract status when the season began, McCutchen called the announcement a relief.

"We've had managers in the past, they were here and they were gone," McCutchen said. "We have someone here that's going to be here and don't have to worry about him leaving or going somewhere else. That's the change in the team with the success that we've had the past couple years and just doing better on improving."

Nutting credited the mutual respect Hurdle and Huntington have for each other as the key to their success. Being able to check their egos at the door helps too. While Hurdle praised Huntington's vision, Huntington believes the Pirates wouldn't have finished their transformation from laughingstock to contender without Hurdle.

"He really was a perfect fit to bring the knowledge the passion the leadership, not just the X's and O's," Huntington said. "He's helped us all grow and helped us all get better and hopefully we've returned the favor."