ESPN
By Scott Burnside
SAN JOSE, Calif. -- To watch Evgeni Malkin play these past two games is to witness a great storm brewing.

It's a storm that has been muted -- sometimes out of sight completely at times during this long Pittsburgh Penguins playoff run -- but the fact that the Malkin storm has arrived in full force in these pivotal moments will be a critical factor if the Penguins do end up winning the Stanley Cup. They'll get their next chance in Game 6 against the San Jose Sharks on Sunday night at 8 ET.

It has been a curious spring for the two-time scoring champ and former playoff MVP and Hart Trophy winner.
For a stretch that extended into the finals against the Sharks, Malkin had one goal in 15 games. It wasn't that he was bad; he has 18 points in the playoffs, after all, ranking seventh. But there were times, as coach Mike Sullivan described it at one point, that Malkin was going more east-west than north-south.

Then, wham -- the storm erupts in Games 4 and 5 with two goals, including the Game 4 winner, plus an assist.

After the Penguins fell behind 2-0 early in Game 5, the entire team was charging hard, but Malkin stood above the fray, controlling the puck, stealing the puck, knocking opposing players around, setting up plays, firing at will and finishing with six shots on goal.

Were it not for the heroics of Sharks netminder Martin Jones, we'd be talking today about the Pens' Stanley Cup parade.

"Yeah, I think I'm [starting to] play with [the] puck more," Malkin, who will play for Team Russia in the World Cup, said after the Penguins' practice at the SAP Center on Saturday. "I feel [the] puck more."

Malkin credited linemates Chris Kunitz and Bryan Rust, both of whom had excellent games on Thursday, when the Penguins had a chance to clinch the Cup on home ice for the first time but came up short in a 3-2 loss.

But with all due respect to Kunitz and Rust, Malkin is the engine that drives that line. Beyond that, when he's as good as he has been the past two games, he gives life to the periodic argument about who the best player in the game might be.

"I feel so much better every game," Malkin said. "Actually, I score couple of goals which of course you feel better after, you know, [that gives you] more confidence. I feel more puck."

Funny how this goes.
Since the Penguins won their last Stanley Cup in 2009, the only one so far in the Sidney Crosby/Evgeni Malkin era, they had not been back to a finals. At one point, they had lost five straight playoff series to teams that finished lower than them in the standings. Following many if not all of those playoff losses -- including last year's first-round exit in five games after the Pens barely snuck into the playoffs -- there has been some debate about whether the team could win as structured.

Specifically, the debate raged about whether they could win with two dominant centers in Crosby and Malkin chewing up as much cap space as they do ($18.2 million, or a little more than 25 percent of the current cap). And if the answer was no -- and that was the answer until this spring -- then would they be better off trading Malkin?

To watch Malkin these past two games, such a suggestion seems nonsensical, but it does speak to the peaks and valleys that every player goes through and how they are so highly magnified when you are a player of Malkin's rare talent.

"When he's on his game and he's skating, he's just able, similar to Sid, he's able to do things with the puck at a high pace, which a lot of guys aren't," said Sharks defenseman Paul Martin, who played with Malkin for five years in Pittsburgh before signing as a free agent with San Jose last summer.

"I think the toughest thing with Geno is he's pretty unpredictable. With a lot of skill guys, you know the areas they like to go, they like to shoot from, certain tendencies. But with him, he's willing to try anything. Which sometimes as a D-man you go with the tendencies or what you expect to happen and he sometimes presents different things you haven't seen before, so you always have to be on your toes."

Specifically, Martin said Malkin likes a defenseman to commit and then to burn him one-on-one. Plus, he's an underrated passer, which adds another layer when it comes to defending him.

Former Malkin teammate Mike Rupp, now an NHL Network analyst, believes there might be a lack of consistency in Malkin's game that comes from not being challenged.

"But when his back is against the wall, in a situation like this, he is dominant," Rupp said.

"I think that's why he verbally calls himself out, to manufacture that feeling. He tends to play down to the level, he needs to be challenged, and he doesn't get it every day. Call it a flaw, or a positive. Can be taken either way."

Bob Errey won two Stanley Cups with the Penguins in the early 1990s and he has watched Malkin grow and mature since he arrived in 2006-07, when he won rookie of the year honors. Errey thinks Malkin is playing a more controlled game than ever before.

"I think Geno is playing much safer," Errey said. "Less risk in his game."

The Penguins have controlled every series this spring virtually from the puck drop.

"They have not needed his dynamics," Errey said. "His team game and puck management are much better."

The Penguins broadcast analyst added, however, "When they needed him in Game 4, he was there. Game 5, yes, I thought he was even better. Both 5-on-5 and power play. He is playing the right way, I would say."

As for having to pick between the two centers, that conversation seems destined for the conversational scrap heap.

"I have always believed they need both stars to win," Errey said. "So hard to defend and match up."

Sharks looking to stay alive in Game 6
Scott Burnside and Pierre LeBrun preview Game 6 of the Stanley Cup finals from the Shark Tank and check the confidence levels of the Sharks' Joe Pavelski and the Penguins' Matt Murray. 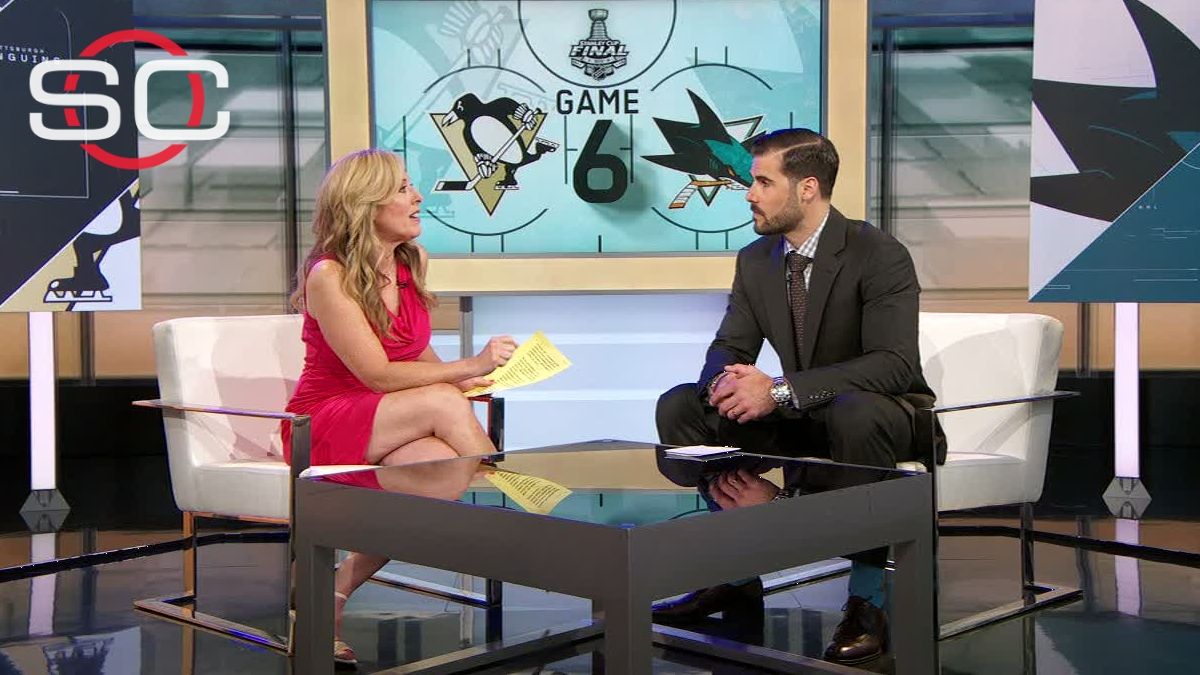