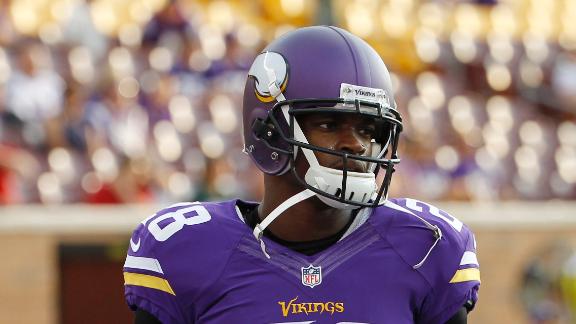 The news of Adrian Peterson's arrest for child abuse drew a mixed reaction from other NFL players, reigniting debates about parenting and corporal punishment while demonstrating the cultural divide regarding the issue.

Peterson turned himself in early Saturday after being indicted for using a branch to spank his 4-year-old son, prompting several NFL players to tweet their own experiences with childhood discipline.

Cardinals defensive lineman Darnell Dockett claimed he also was hit with a "switch," a tree branch that Peterson used to discipline his child.

I got a ass whippn at 5 with a switch that's lasted about 40mins and couldn't sit for 2days. It's was all love though. Times have changed!

- DARNELL DOCKETT (@ddockett) September 13, 2014Saints running back Mark Ingram also tweeted that he was disciplined as a child, stating that his parents wanted him to "be the best human possible!"

When I was kid I got so many whoopins I can't even count! I love both my parents, they just wanted me to be the best human possible!

- Mark Ingram (@MarkIngram22) September 13, 2014The Minnesota Vikings reacted swiftly to the news about Peterson, deactivating the star running back for Sunday's game against the New England Patriots.

Falcons receiver Roddy White, one of the NFL's most active players on Twitter, complained that Peterson's absence would negatively impact his fantasy football lineup.

In a tweet that has since been deleted, White wrote, "I'm probably going to lose my fantasy football matchup this week cause [Peterson] can't play Sunday for disciplining his child Jesus help us." White tweeted out an apology later Friday.

I should not have made light of a very serious situation. I understand the strong feelings about this issue and i shouldn't have said that

What's child abuse in 2014 was normal in the 80s where I grew up and also with people in my age range.

- Donte' Stallworth (@DonteStallworth) September 13, 2014But times have changed and society is not as accepting of those standards of discipline as we once were.

An investigation headed by former FBI director Robert Mueller was convened to assess the league's handling of the situation, aftera law enforcement official told The Associated Press on condition of anonymity that he sent the tape of Rice in the elevator to an NFL executive in April.

Acknowledging he "didn't get it right" with Rice's initial two-game suspension, NFL commissioner Roger Goodell announced tougher penalties last month for players accused of domestic violence, including six weeks for a first offense and at least a year for a second.

Goodell's memo sent to all 32 teams said more severe discipline will be imposed "if there are aggravating circumstances such as the presence or use of a weapon, choking, repeated striking, or when the act is committed against a pregnant woman or in the presence of a child." Whether the charge against Peterson would fall under that umbrella was not immediately clear.

The league has also come under scrutiny in the cases of Panthers defensive end Greg Hardy and 49ers defensive tackle Ray McDonald, both still playing with domestic abuse cases pending. Hardy was convicted July 15 of assaulting a woman and communicating threats, but he is appealing. San Jose police have been continuing to actively investigate an Aug. 31 incident involving McDonald.

Former Vikings punter Chris Kluwe, who was Peterson's teammate for parts of six seasons, cited the cases regarding Hardy and McDonald while praising Minnesota for swiftly deactivating Peterson.

I think the league can be better, and it must be better, if it wants to justify the money it makes. Tough to watch it fail though.

- Chris Kluwe (@ChrisWarcraft) September 13, 2014I will say this: I've had my issues with the Vikings. However, they deactivated AP this weekend. Greg Hardy and Ray McDonald are playing.