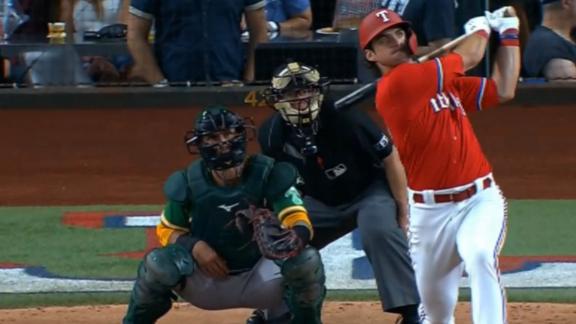 Pozo swung at all seven pitches he saw in the game, including one from veteran Sergio Romo that he launched high off the netting of the left field foul pole. The 24-year-old also singled against the first pitch he saw as a big leaguer in the second inning.


Pozo laughed and jumped on his way around the bases after the homer. He said when he reached the dugout, "my mind was blown out."

Dennis Santana (2-2) won despite giving up two runs in the sixth inning to let Oakland go up 4-3. Rookie Joe Barlow pitched a scoreless ninth inning for his first major league save.

Pozo was called up Friday from Triple-A Round Rock, where he was second in Triple-A West in RBI (63), fourth in batting (.337) and fifth in home runs (19). Primarily a catcher, he served as Texas' designated hitter and batted eighth Friday.

Pozo's hitting this year has improved greatly over past seasons. He attributes that to his son, Paul, born last year. Pozo said Paul had a stroke and almost died.

"He taught me how to be strong," Pozo said.

Romo hadn't allowed a run in his previous 17 appearances.

"He knew the guy was going to be an aggressive swinger," A's manager Bob Melvin said. "Throw a slider - just didn't get it where he wanted to."

Peters homered just inside the left field foul pole in the seventh inning.

Matt Olson hit his 29th homer and Seth Brown had two RBI doubles for the A's, who ended a seven-game winning streak. They lead Boston by one game for the American League's first wild-card spot.

The Rangers jumped on Irvin for three first-inning runs five batters in, aided by two Oakland errors. They came in having scored one run in each of their previous two games, ranking last in the American League in runs. It was their most runs since scoring 10 on July 6.

Texas rookie starter Dane Dunning, the only Rangers pitcher with multiple wins since the All-Star break, sought his third straight win. Dunning took a shutout into the fifth inning but was pulled with two outs and allowed two runs.

Oakland SS Elvis Andrus will be placed on the paternity list Saturday for the birth of his third child in California. The former longtime Ranger will miss not only the middle game of the series but the pre-game induction of close friend Adrian Beltre into the club's Hall of Fame.

Starling Marte, who has played 13 games with Oakland since being acquired from Miami on July 28, had an RBI single for an 11-game hitting streak. ... Pozo is the 10th Ranger to homer in his first big league game. ... Olson had one homer in his previous 14 games.

Rangers: RHP Kohei Arihara (shoulder surgery), out since early May, should return "fairly soon" according to manager Chris Woodward.

A's RHP James Kaprielian (6-4, 3.22 ERA) has the second-lowest ERA in the American League. He beat Texas last Sunday after coming off the injured list.