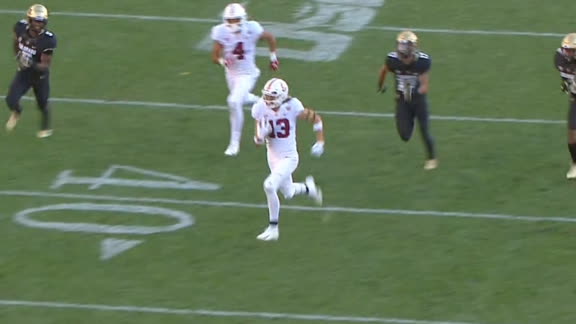 BOULDER, Colo. -- Those bowl thoughts by the Colorado Buffaloes are still distant. At least they're still flickering.

For that, they can thank a banged-up Laviska Shenault Jr. picking up a late fourth down with a powerful surge, a maligned defense digging in and of course a fill-in freshman kicker coming up clutch with the biggest boot of his life.

Evan Price made a 37-yard field goal with no time remaining as Colorado beat Stanford 16-13 on Saturday to snap a five-game skid.

"Finally," Shenault said. "Finally, we got this one. Shout-out to our kicker -- freshman, too."

Price was promoted this week with James Stefanou dealing with a hip injury. Price was instantly mobbed by teammates, briefly falling to the ground and losing his helmet. It was Colorado's first game-winning field goal as time expired since Sept. 29, 2007, against Oklahoma.

"A surreal feeling," said Price, who made three field goals, including a tying one with 7:34 remaining. "A lot of people put it all on me for making that kick. It was just one kick. It was an amazing drive .... I just did the last 1% of it."

Shenault and the offense did the rest for the Buffaloes (4-6, 2-5 Pac-12), who need to win their final two games to become bowl eligible.

Quarterback Steven Montez methodically drove the Buffaloes down the field to set up the winning score. The drive was aided by a pass interference call on Stanford's Kyu Blu Kelly, who reached out to slow down Tony Brown on a deep pass. Colorado also went for it on fourth-and-short at the Stanford 34, with Shenault Jr. taking a handoff and churning for the yardage -- banged up knee and all.

Shenault briefly went to the Colorado locker room late in the second quarter with a knee injury only to return for the second half. He had eight catches for 91 yards.

"That doggone No. 2 (Shenault's number), he's a special player," Stanford coach David Shaw said. "We had a chance to tackle him a couple of times, but we couldn't get him on the ground."

Stanford (4-5, 3-4) must win two of its final three contests to extend its bowl streak to 11 straight seasons.

"We weren't good enough and that's a hard pill to swallow," Stanford linebacker Casey Toohill said. "But that's the truth."

K.J. Costello gave Stanford its first lead of the game early in the fourth quarter when on third-and-15 he found Simi Fehoko over the middle. Fehoko took it from there, splitting several defenders and bursting to the end zone for a 79-yard score.

The Buffaloes defense turned in their best performance of the season. It's the first time this season they've held a team under 30 points.

"Oh man, the played phenomenal," Montez said. "We still have a lot of things in front of us. We can still do the things we want to do -- if we play good football."

Stanford: The Cardinal rarely lose this time of year. They fall to 25-8 under Shaw in November.

Former Colorado head coach Gary Barnett and other members of Colorado's recently inducted athletic hall of fame class were recognized at halftime. Barnett went 49-38 over seven seasons (1999-2005). Among the other inductees were Jenny (Barringer) Simpson -- the 2016 Olympic bronze medalist in the 1,500 meters -- and late football coach Fred Folsom (his name is on the stadium).

Stanford: At Washington State next Saturday.

Colorado: After a bye week, host Washington on Nov. 23.