Prints of Hernandez, victim in car 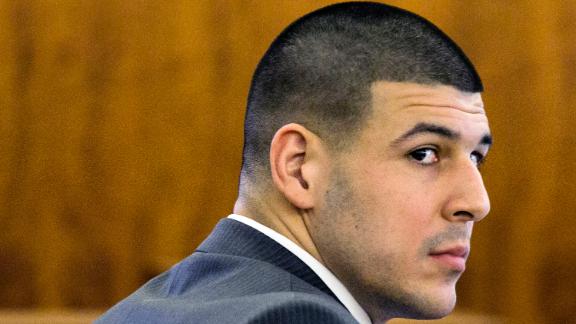 FALL RIVER, Mass. -- A state police trooper who specializes in fingerprint analysis testified Tuesday in the murder trial of Aaron Hernandez that the fingerprints of the former NFL player and his alleged victim, Odin Lloyd, were found inside a car that was allegedly used to drive Lloyd to his death.

Prosecutors say Hernandez, then a New England Patriots tight end, and two friends, Carlos Ortiz and Ernest Wallace, picked up Lloyd from his home early on the morning of June 17, 2013, shortly before he was killed.

Massachusetts State Police Trooper David Mackin, who processed the fingerprints found inside a Nissan Altima that Hernandez had rented, testified that Lloyd's fingerprints were found on the handle of the rear passenger side door.

Lloyd's sister testified Monday that she saw Lloyd get into the rear passenger side of a silver Nissan that night but could not see the driver. Video from a neighbor's surveillance camera also showed Lloyd getting into a car at 2:32 a.m. Prosecutors have said Lloyd was dead by 3:30 a.m., shot to death in an industrial park near Hernandez's home.

Mackin testified that Hernandez's fingerprints were found on the inside handle of the driver's side. Surveillance footage from the night of the killing shows Hernandez getting into the driver's seat of a Nissan Altima, which he had rented the previous week.

Ortiz and Wallace have also been charged with murder and have pleaded not guilty. They will be tried separately.

Around 2 a.m. the day of Lloyd's slaying, Hernandez and Ortiz were captured on video at a gas station south of Boston. It shows Hernandez putting gas in a Nissan Altima before entering the gas station and buying gum and cigars with Ortiz. They get back in the car, with Hernandez in the driver's seat and Ortiz in the back. They leave at 2:12 a.m. Prosecutors have said the group then drives to Lloyd's home in the Dorchester section of Boston.

During cross-examination Tuesday, defense attorney James Sultan went after Mackin's credentials, saying Mackin was not certified as a fingerprint expert.

The defense has tried to paint a picture of a shoddy police investigation, and it suggested that Mackin was on the prosecution's side.

In other testimony Tuesday, prosecutors showed the jury text messages that Hernandez sent to Lloyd hours before the shooting. In them, Hernandez says he wants to meet with Lloyd.

"I'm coming to grab that tonight u gon b around I need dat and we could step for a little again,'' Hernandez wrote in one text to Lloyd at 9:05 p.m. on June 16. He sent more messages urging them to get together.

A maid who cleaned Hernandez's hometestified that she saw him "messing with" the security camera in his basement the day after the killing.

Glaucia Santos said Tuesday that she was cleaning a bathroom when she heard Hernandez enter. She says she saw him touching the camera, which is located on the basement's family room ceiling.

During cross-examination, defense attorney Michael Fee presented a layout of Hernandez's basement. He suggested that Santos couldn't have seen Hernandez or the camera from where she was.

Santos could not say what Hernandez was doing with the camera.