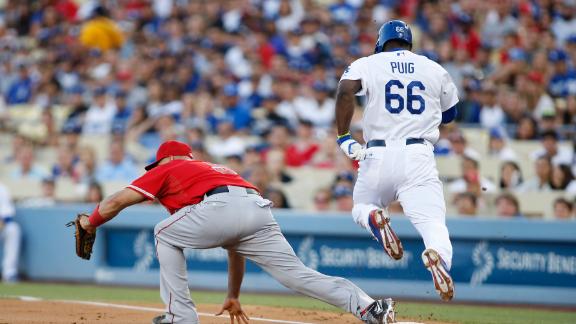 LOS ANGELES -- Yasiel Puig wasn't fully alert while playing a fly ball, and Albert Pujols made him regret it as the Cuban national continued to learn from his mistakes Monday night in the eighth inning of the Angels' 5-0 win at Dodger Stadium.

Pujols tagged up and sprinted to second base after Puig caught a deep fly ball hit by Josh Hamilton, and the two seemed to exchange words on the field. Puig hadn't initially been paying attention to Pujols, and by the time he took note, his throw into second was late.

After Erick Aybar also flew out to center, Puig gestured with his glove in Pujols' direction as if encouraging him to try it again. Pujols waved dismissively in Puig's direction, then they jawed at each other after the inning.

Between innings, Pujols appeared to mock Puig for his lackadaisical catch on the fly, but Pujols bristled when asked about it after the game. He said he would have attempted to tag no matter who the center fielder was and that Puig's gesture didn't bother him.

"He can do whatever he wants," Pujols said. "I'm fine. I don't have any problem."

The Dodgers were hoping the play could serve as a learning experience for Puig.

"If Yasiel comes up throwing, he's going to stop. As soon as Yas drops his head, at that point, it's in play," Dodgers manager Don Mattingly said. "We talk about it. These guys are aggressive. They know how to play, and if you don't pay attention, they'll embarrass you."

Puig, batting .319, has been mistake-prone since he arrived in the big leagues in June 2013 after short stays in Class A and Double-A, but he has gradually cleaned up areas of his game this season, most notably improving on hitting cutoff men and chasing pitches out of the strike zone.

"We're all going to make mistakes," Dodgers catcher A.J. Ellis said. "I got to make a lot of my learning mistakes on A-ball fields with 1,200 people in the stands. Yasiel didn't get that opportunity. He came straight to the big leagues, and he's still learning things. Hopefully, when you make a mental mistake, you'll never make it again." 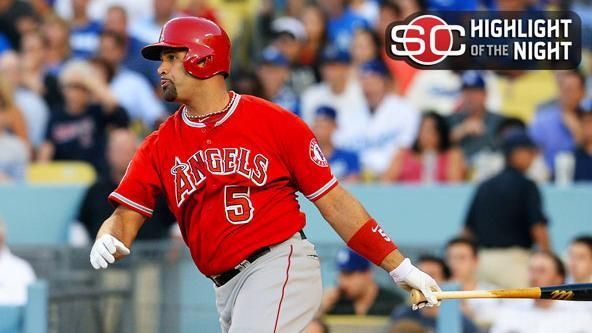