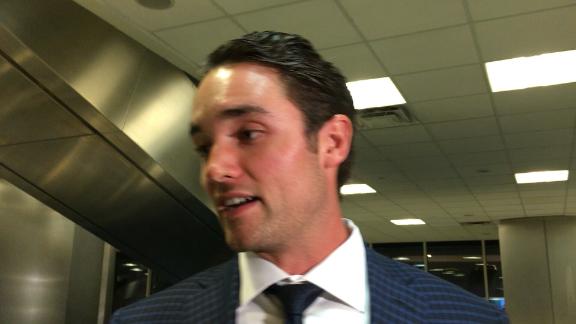 HOUSTON -- His flight was delayed by a thunderstorm, but moments after he finally landed at George Bush Intercontinental Airport, Texans quarterback Brock Osweiler arrived in Houston on Wednesday night itching to get to work with his new franchise.

"Coming to Houston was an opportunity that I couldn't pass up," Osweiler said. "What I see with this football team is something special. I believe this organization is on the cusp of doing something great. That's something I want to be a part of. I'm very excited to be here and just get to work."

The Texans reached an agreement to sign Osweiler just before the league year opened Wednesday. The four-year deal is worth $72 million, according to ESPN NFL Insider Adam Schefter. Osweiler will be among the top 10 highest-paid quarterbacks in terms of 2016 cash. He is guaranteed $37 million over the length of the contract.

The Texans have historically lacked consistency at quarterback. Under coach Bill O'Brien, they started seven quarterbacks in the past two seasons and managed a winning record in both campaigns. Last season, the Texans made the playoffs, winning the AFC South with a 9-7 record, only to have quarterback Brian Hoyer throw four interceptions and lose a fumble in a 30-0 loss to the Kansas City Chiefsin the wild-card round.

"I'm excited," Texans receiver Cecil Shorts III told ESPN's Britt McHenry via text message. "He's learned behind one of the best to ever play. ... It's an exciting time to be a Texan."

Osweiler was a second-round pick by the Denver Broncos in 2012 and spent the past four seasons as Peyton Manning's backup. Last season, Osweiler started seven games, playing in eight. He won his first three starts then split the next four.

"It was very difficult," Osweiler said of leaving the Broncos. "I'd be lying to you if I said anything else. I had a tremendous four seasons there in Denver, and you know those are four years that I'll always hold very close to my heart."

With Manning's retirement and Osweiler's departure, the Broncos are left with just one quarterback on the roster: Trevor Siemian.

"We've stayed true to our philosophy of building a team with players who want to be Denver Broncos and want to be here," Broncos executive vice president and general manager John Elway said Wednesday. "That's been a successful approach for us."

The Broncos were unwilling to match what the Texans were willing to spend.

"While we did offer a very competitive and fair long-term contract to Brock, we ultimately had to remain disciplined while continuing to assemble a roster that can compete for championships," Elway said.

Given Osweiler's contract, though, there's little doubt it's his job to lose.

"Ultimately, a world championship," Osweiler said of his goal in Houston. "Bottom line, I believe that comes from a lot of hard work. I know this team already has guys in the locker room who bring leadership, who bring hard work to the table. My biggest deal is I just want to do my job. I want to contribute to this team in a positive manner and do whatever it takes to win a world championship."