OAKLAND, Calif. --Derek Carr is not usually one to argue with game officials. But on this occasion, the Oakland Raiders quarterback was steamed.

Carr had just thrown his second interception in the third quarter of the Raiders' 28-10 loss to the Kansas City Chiefs on Sunday, when a flag came flying in. Surely, it would be for defensive pass interference after Oakland receiverRyan Grant was knocked off his route by Chiefs safetyTyrann Mathieu, milliseconds before Kansas City'sCharvarius Wardsnagged the pass meant for Grant, no?

No. Grant was called for offensive pass interference, and the Chiefs declined the penalty.

"The second interception will blow my mind forever," Carr said. "It was offensive pass interference; they said he was blocking. So, I asked the man, I said, 'Sir, why would I throw him the ball if he was blocking?'

"And he didn't have an answer and just walked away. I don't know what to do in that sense. We got the coverage we want, we got the exact look we want, I'm throwing it to where I'm supposed to throw it, and they tackle our receiver -- yet it's a penalty on us. This is changing the outcome of a football game. That shouldn't happen. That blows my mind. When things like that happen, I get kind of upset."

It was the second straight series ended by a Carr pick, after he threw a jump ball to Tyrell Williams on first-and-goal from the 1-yard line that was hauled in by Bashaud Breeland in the end zone. (It was the third pick of Carr's career thrown on first-and-goal.)

On the Grant play, the Raiders, trailing 28-10 late in the third quarter, were facing second-and-7 at their own 47-yard line.

"It was a slant pattern," Raiders coach Jon Gruden said. "I've never had an offensive pass interference called on a slant, but we did today, and that one worked against us as well."

It was not all bad for Carr on the day, though, as he surpassed late Hall of Famer Ken Stabler to become the Raiders' all-time leader in passing yardage after throwing for 198 yards on 23-of-38 passing with a touchdown and two interceptions against the Chiefs. Carr has thrown for 19,196 yards in his career; Stabler passed for 19,078 yards for Oakland. 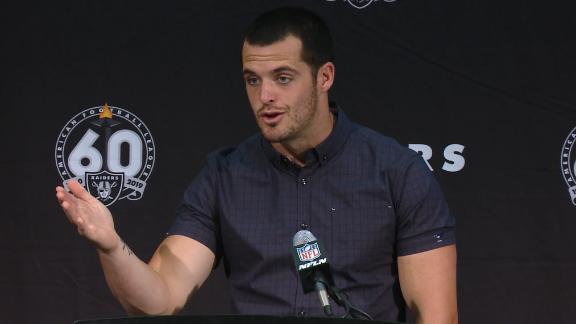